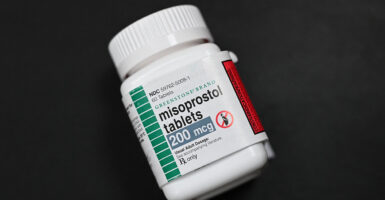 House Republicans have introduced a bill to end mail-order abortions, aiming to nullify recent rule changes from the FDA. Misoprostol, one of the two drugs used in a medication abortion, can now be prescribed to women through telemedicine under the FDA’s plan. (Photo: Robyn Beck/AFP/Getty Images)

A group of House Republicans have introduced a bill to place restrictions on chemical abortion pills. If enacted, access to abortion pills would be limited to in-person distribution.

The legislation would nullify recent rule changes from President Joe Biden’s Food and Drug Administration that allows the abortion drug regimen of mifepristone and misoprostol to be prescribed to women via telemedicine and delivered by mail, and gives pharmacies permission to fill prescriptions for abortion drugs.

“The FDA’s policy change for mifepristone is the latest example of President Biden’s crusade toward abortion on demand at any cost, even at the expense of women’s health,” Rep. Diana Harshbarger, R-Tenn., told The Daily Signal.

The pro-life bill would also prevent the FDA from creating a similar rule change in the future.

Harshbarger introduced the bill Tuesday along with 13 other members of the Republican Study Committee, including the committee’s chairman, Rep. Kevin Hern, R-Okla.

Because of the risk of possible “life-threatening complications” associated with abortion drugs, Harshbarger said, “every woman in America deserves to know the heightened risks involved with chemical abortions before they make a life-altering decision.”

“My bill restores commonsense and proper safety prescriber requirements for the dispensing of these dangerous abortion drugs,” the Tennessee lawmaker added.

Mifepristone, the first pill taken in the regimen, kills an unborn baby by cutting off progesterone, a hormone the child needs to survive. The second pill, misoprostol, causes contractions to expel the baby from the woman’s body. The drugs are approved to be taken up to 10 weeks into pregnancy.

“By removing the requirement that women seeking access to the abortion pill must receive the prescription from a medical provider in person, the Biden administration has placed the health and well-being of women in jeopardy,” Rep. Doug Lamborn, R-Colo., told The Daily Signal.

In April 2021, the Biden administration announced a temporary policy change to remove a requirement that chemical abortion drugs be dispensed in person.

A letter signed by Janet Woodcock, then acting commissioner of the FDA, was sent to the American College of Obstetricians and Gynecologists and the Society for Maternal-Fetal Medicine, informing them of the change.

In the letter, Woodcock cites four medical publications that she says “found that although there are limitations to the study designs, the overall findings from these studies do not appear to show increases in serious safety concerns (such as hemorrhage, ectopic pregnancy, or surgical interventions) occurring with medical abortion as a result of modifying the in-person dispensing requirement during the COVID-19 pandemic.”

In December 2021, the Biden administration moved to permanently remove the in-person requirement for distributing abortion drugs. About a year later, the FDA finalized the rule change, officially opening the doors for pharmacies to provide the pills and for permanent access to mail-order abortions.

Lamborn, one of the co-sponsors of the bill, said the FDA’s rule change will not only “put women with possible health conditions and concerns at risk for further health complications, but it completely negates the opportunity for women to learn about the options they have, other than terminating their pregnancy.”

The FDA’s rule change does not apply to states with strong pro-life laws restricting or prohibiting abortion.

“June’s monumental pro-life victory in the [Dobbs v. Jackson Women’s Health Organization] Supreme Court case provided us with an opportunity to save millions of lives across the United States,” Hern told The Daily Signal.

“President Biden’s abuse of executive power has gone on long enough,” Hern said. “Biden’s pattern is alarming. Time and time again, he disregards the rule of law to cave to the radical Left’s demands. Protecting life isn’t just a conservative priority; it’s something every American can support. I’m proud of the Republican Study Committee’s leadership in this arena, and I hope to see [Harshbarger’s] legislation on the House floor soon.”

In addition to Harshbarger, Lamborn, and Hern, the bill was co-sponsored by Republican Reps. Jim Baird and Jim Banks of Indiana, Buddy Carter of Georgia, Randy Weber and Ronny Jackson of Texas, Mary Miller of Illinois, Daniel Webster of Florida, Jeff Duncan of South Carolina, Randy Feenstra of Iowa, Paul Gosar of Arizona, and Chris Smith of New Jersey.