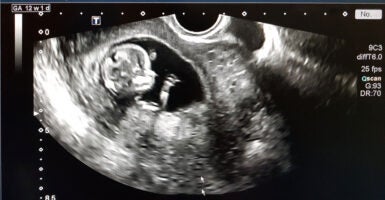 An abortion pill, mifepristone, causes the death of the unborn child by cutting off the hormone progesterone, which is required to sustain a pregnancy. The regimen is approved to be used for up to 70 days, or 10 weeks, into a pregnancy. Pictured: An ultrasound of a twelve-week-old unborn child. (Photo: Getty Images)

The Food and Drug Administration announced Thursday that it will significantly weaken longstanding safety protocols that have applied to dangerous chemical abortion pills for more than 20 years, opening the door to widespread telemedicine abortion and abortion pill-by-mail distribution.

The Biden administration’s decision is a response to the abortion industry’s demands at the expense of women’s health and safety.

Here’s what you need to know about how the Food and Drug Administration’s actions will further endanger women and what this means for the abortion policy landscape going forward.

Abortion Pills and the Risk Evaluation and Mitigation Strategy

The chemical abortion pill regimen is a two-part process. The first pill, mifepristone (also known as RU-486 or its brand name, Mifeprex), causes the death of the unborn child by cutting off the hormone progesterone, which is required to sustain a pregnancy.

The second pill, misoprostol (brand name Cytotec), causes contractions to empty the uterus. The regimen is approved to be used for up to 70 days (10 weeks) into pregnancy.

The rate of chemical abortion has increased by 120% in the past decade, with roughly half of abortions today being chemical rather than surgical.

The Food and Drug Administration imposes a safety program called a Risk Evaluation and Mitigation Strategy (REMS) on 62 drugs currently on the market to “ensure that the benefits of a drug … outweigh the risks.” One such drug is mifepristone, the abortion pill.

Under the heightened safety protocols of the mifepristone risk evaluation and mitigation strategy, the drug can only be dispensed by a qualified prescriber who seeks permission from the abortion pill manufacturer. This means those who prescribe the abortion pill tend to be abortion providers who “opt in” rather than your everyday primary care doctor or OB-GYN.

Another condition was a requirement that mifepristone only be dispensed in certain healthcare settings such as a clinic or hospital. But the Food and Drug Administration’s update Thursday to the mifepristone REMS made a significant change.

What does it mean in practice? It means the Food and Drug Administration has formally sanctioned abortion pill-by-mail, leaving women to have risky do-it-yourself abortions alone, without medical supervision.

Since the Food and Drug Administration approved mifepristone in 2000, the drug has been associated with 26 deaths, thousands of serious adverse events, and more than 500 life-threatening complications (that we know of, due to lackluster state and federal reporting requirements). Life-threatening complications include sepsis and ruptured-ectopic pregnancy. Other side effects can include fever, pelvic inflammatory disease, cramping, nausea, and severe bleeding.

The complication rate from abortion pills is four times that of a first trimester surgical abortion. One recent study found that between 2002 and 2015, emergency room visits following a chemical abortion increased by more than 500%.

So how does mail-order abortion put women even further at risk?

It is impossible for a prescriber who may not even be in the same town—or state—to rule out ectopic pregnancy without an ultrasound; no screening questions during a video chat can replace an in-person evaluation in this context.

Neither can a prescriber precisely date a pregnancy, meaning more women might be prescribed an abortion pill well past 70 days gestation (a serious risk itself, as the risks from a chemical abortion increase the farther along in pregnancy she is).

Or consider what in-home do-it-yourself abortions mean for women who face coercion and threats from an unsupportive partner, an abuser, or a human trafficker. The American Association of Pro-Life OB-GYNS notes, a “visit with a physician in early pregnancy is the only chance these women will have to expose this pressure they’re facing.”

The number of abortion facilities declined 5% between 2014 and 2017. Most private practice OB-GYNs don’t perform abortions, and among those, only half are willing to refer patients elsewhere. Allowing mail-order abortions is a boon to the abortion industry, allowing it to expand far beyond brick-and-mortar clinics.

The Supreme Court may correct a grave constitutional error and overturn Roe v. Wade via the Dobbs vs. Jackson Women’s Health Organization case, which was heard at the Supreme Court Dec. 1.

But even if the Supreme Court rules that states may protect unborn children before viability (roughly 24 weeks, the point at which a child can survive outside the womb), mail-order abortion pills will make it harder for states to protect women and unborn children within their jurisdictions.

In fact, abortion-industry advocates have called for abortion pills to be available over-the-counter, or even taken as a monthly preventive measure, rebranding mifepristone as a “missed period pill.”

It’s clear that pro-abortion advocates will continue agitating to remove remaining safety protocols and make abortion pills as widely available as possible, regardless of what the science and data tells us about the dangers.

Now more than ever, policymakers—particularly at the state level—must counteract the Food and Drug Administration’s ideologically motivated surrender to the abortion lobby by protecting life in their jurisdictions. They can do this through policies that include prohibitions on telemedicine and mail-order abortions, heightened informed-consent requirements, and reporting requirements to better track complications. Six states—Arizona, Indiana, Montana, Ohio, Oklahoma, South Dakota, and Texas—have already taken such action.

At the federal level, opportunities to pursue pro-life policies currently face the challenges of a pro-abortion House of Representatives and presidential administration. Nonetheless, from committee hearings to communications with administration officials, policymakers should embrace their duty to conduct oversight activity at President Joe Biden’s Food and Drug Administration.

Protecting women and unborn children’s health and safety—not checking off items from the abortion industry’s Christmas wish list—should be the policy priority at all levels of government.