Why the Biden Administration Is So Interested in Your Gas Stove 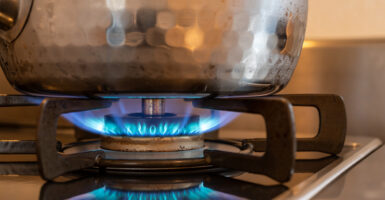 Americans' use of gas stoves may be limited or banned by the Consumer Product Safety Commission, in another dubious claim by the Biden administration about fighting climate change. (Photo: Seiya Tabuchi/Getty Images)

Kristen Eichamer is a senior media analyst at The Heritage Foundation.

The U.S. Consumer Product Safety Commission is considering creating regulations, and even a ban, on natural gas stoves over concerns that research links harmful air pollutants with such stoves.

The agency is still gathering information, but Trumka, a Democrat appointed by President Joe Biden, said a ban is possible because, as he told Bloomberg: “Products that can’t be made safe can be banned.”

About 40% of Americans, including operators of many restaurants, use gas stoves.

Conservatives, including lawmakers, quickly mocked the idea on social media, using a photo from a 2020 tweet by Jill Biden, now first lady, showing her heating greens on a gas stove.

If gas stoves were really a health hazard, would “doctor” Jill Biden be using one?? I think not.https://t.co/2DQMkP2ZIy pic.twitter.com/QSH3A72Ifj

The Consumer Product Safety Commission has yet to propose new restrictions on gas stoves, but the Biden administration appears to be seeking to restrict Americans’ access to natural gas on the dubious premise of fighting climate change.

On today’s edition of the “Problematic Women” podcast, we discuss why the Biden administration appears to be so interested in banning gas stoves all a sudden, and why it may be a deliberate tactic to distract from President Joe Biden’s policy failures.

Also on today’s show, the Biden administration challenges states with new tactics to expand Americans’ access to abortion. We tell you what you need to know. Plus, the president finally pays a visit to the southern border, although many believe the trip was at least two years too late. And as always, we’ll crown our Problematic Woman of the Week.