‘December Was the Only Month in Biden’s Presidency When Prices Fell,’ Economist Says 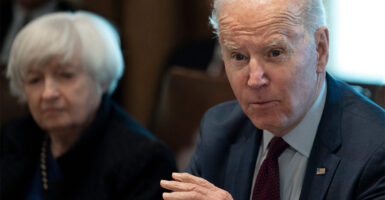 An economist says “consumers are still being crushed” despite the December inflation report released Thursday showing a “slight reduction” in prices.

The consumer price index, a key inflation measure, decreased 0.1% in December, up 6.5% from December 2021, the U.S. Bureau of Labor Statistics reported.

“The slight reduction in the overall prices for December was a welcomed relief for consumers in a year that saw the highest inflation in over 40 years,” EJ Antoni, a research fellow for regional economics in the Center for Data Analysis at The Heritage Foundation, told The Daily Signal in a statement. “But December was the only month in [Joe] Biden’s presidency when prices fell, and consumers are still being crushed.” (The Daily Signal is Heritage’s multimedia news organization.)

“Since Biden took office, prices for common consumer staples are substantially higher: eggs are up 189.9%, and gasoline is up 44.3%,” Antoni said.

The report is nearly in line with a prediction from Bank of America, which expected December’s consumer price index would decrease 0.1% from November and a year-over-year rate of 6.4% compared to 7.1% in November, The Wall Street Journal reported.

If you are trying to buy a home today, you’ll have a monthly payment about 80% higher compared to when Biden became president. And it will cost you 17.0% more to heat your home this winter compared to last year.

Conservatives in Congress must rein in the profligate federal spending if American families are going to see any lasting relief.

“For the sixth month in a row, yearly inflation is down,” Biden said in a tweet. “It might be rising in economies around the world, but it’s coming down here. And gas prices, food, and more are following.”

“That adds up to a break for families and proof that my plan is working,” the president said.

“So, the data is clear: Even though inflation is high in major economies around the world, it is coming down in America month after month, giving families some real breathing room. And the big reason is falling gas prices. My administration took action to get oil onto the market and bring down prices,” Biden said.

Now, gas is down more than a $1.70 from its peak. And that adds up to a family with — a typical family with two vehicles to a savings of $180 a month, every single month, that stays in their pockets instead of being spent at the pump.

Food inflation is slowing, as well. Last month, we saw the smallest increase in food prices in almost two years. And much of that increase was due to the avian flu outbreak, which has driven up the egg prices around — in the United States.

“The Inflation Reduction Act—passed by Democrats over uniform Republican opposition—lowers the federal deficit,” Michael Kikukawa, assistant press secretary for the White House, told The Daily Signal in an email.

However, Antoni pushed back on Kikukawa’s claim.

“Most of the alleged deficit reduction in the Inflation Reduction Act relies on more IRS audits and a new tax on corporate book income. Both of those revenue sources may not even materialize,” Antoni said.

“The Penn Wharton Budget Model estimated in a realistic scenario that deficits over the next decade would be reduced by less than 1%,” Antoni added.

The report is slightly better than the November report that showed the consumer price index increased 0.1% in November, up 7.1% from November 2021. The November figure marked a slowdown in rampant inflation, but not a reversal of the trend that has caused prices for everyday goods like food and gas to ratchet up in recent months.