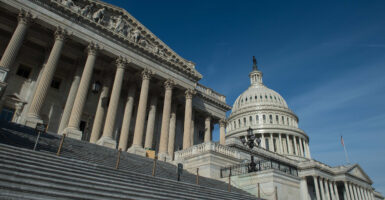 The U.S. Capitol is seen in Washington, D.C., Jan. 3, 2018, before the opening of the second session of the 115th Congress. (Photo: Nicholas Kamm/AFP via Getty Images)

House Democrats almost unanimously voted Wednesday against a bill to protect babies who are born alive though botched abortions.

The Born-Alive Abortion Survivors Protection Act passed 220 to 210. The legislation would amend Title 18 of the United States Code to “prohibit a health care practitioner from failing to exercise the proper degree of care in the case of a child who survives an abortion or attempted abortion.”

In speeches delivered on the House floor Wednesday, Democrats described the legislation as “extremist, dangerous, and unnecessary,” claimed that they did not support the bill because it would require a “struggling baby” to go to a hospital that might be far away and thereby jeopardize the baby’s life, and more.

“This bill unnecessarily restates current law requiring a doctor to provide the same standard of medical care for an infant born during an abortion procedure as they would for any other infant,” Democratic Whip Katherine Clark said in an email to lawmakers ahead of the vote as she urged them to vote “no.”

“It would also override a provider’s medical judgment, requiring them to transport a newborn infant to a hospital even in cases where that is not in the interest of the infant’s health,” she added. “Additionally, the bill would impose criminal penalties on health care providers, including up to five years of imprisonment.”

“Our government’s most sacred duty is to safeguard the lives of all Americans. We thank GOP leadership for recognizing the federal government’s crucial role in protecting our most vulnerable children and their mothers in the Dobbs era,” she said. “In contrast to the Democrats’ top agenda item of pushing abortion on demand until birth and even infanticide, paid for by the taxpayer, Republicans are aligned with the majority of Americans who reject pro-abortion extremism.”

The March for Life also applauded Republicans for “prioritizing commonsense.”

Groups like Planned Parenthood Action claimed that the Born-Alive Abortion Survivors Protection Act spread misinformation about abortion, urging Americans to push Congress to reject the legislation. The Democratic whip, Clark, claimed that the born-alive legislation is “deliberately misleading and offensive to the women who face pregnancy complications and the doctors and nurses who provide their care.”

“It comes down to this: the American people – not MAGA politicians – should make their own health care decisions,” she tweeted.

The legislation aimed to protect unborn babies aborted by abortionists like Dr. Cesare Santangelo, allegedly recorded by Live Action as saying in 2012: “We would not help it,” of a baby who survived an abortion.

“We wouldn’t intubate, let’s say,” he allegedly explained in the Live Action video, noting that he “wouldn’t do any extra,” and comparing letting the baby die to letting a terminal person die.

“Like a ‘do not resuscitate’ order,” he allegedly added. Santangelo has recently come under fire following the discovery of a box of aborted babies that was allegedly on its way from a clinic to a medical waste facility.

Pro-life activists accuse Santangelo of illegally aborting babies in violation of the Partial-Birth Abortion Ban Act of 2003, which prohibits physicians from performing partial-birth abortions except when the mother’s life is in danger.