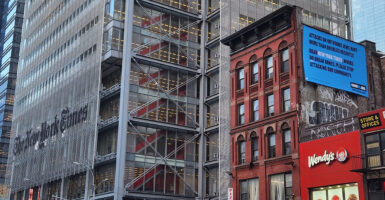 An Orthodox Jewish organization in New York City has launched a public information campaign to combat what it describes as The New York Times’ “crusade” against Hasidic Jews and their schools, a torrent of negative coverage that comes amid an uptick in antisemitic hate crimes shown by police data.

The organization, Agudath Israel of America, erected three billboards in prominent New York City locations, including one across from The New York Times’ office building. It also has launched a website, KnowUs.org, published a white paper, and released a video about the issue.

Agudath Israel points to 12 negative Times articles published in three months as well as the city’s hate crime statistics for November, which at 45 reported incidents was more than double the 20 incidents reported the previous November.

Summing up the Times’ coverage, Agudath Israel states that “the Times has engaged in nothing short of a crusade against the Orthodox and Hasidic community.”

“Publishing inaccurate, offensive articles against a minority group is always wrong. Churning such articles out in today’s climate, when Jews are being beaten in the streets of Brooklyn, is like chain-smoking in a gas station,” Avrohom Weinstock, associate director of education affairs at Agudath Israel, told The Daily Signal on Thursday.

“It would not be tolerated if perpetrated against any other group or minority—correctly so—and should not be tolerated now,” Weinstock added. “As a nonprofit, Agudath Israel of America does not have the megaphone that The New York Times has, but in addition to the billboards, we have created KnowUs.org, a white paper, and videos, all intended to provide another perspective.”

The New York Times did not respond to The Daily Signal’s request for comment.

The newspaper’s articles in question highlighted Orthodox Jewish political organizing as if it were negative and condemned Orthodox Jewish schools, called yeshivas, urging more regulation of these schools and claiming they fail to provide a quality education.

“I have no understanding into what is motivating The New York Times in its campaign against Orthodox Jews,” Weinstock said. “But while I cannot ascertain the paper’s motives, the trend is clear: selective sourcing, faulty data, extreme bias. Unrelentingly.”

The Agudath Israel official cited numerous examples, including “painting child abuse and corporal punishment as a ‘regular feature’ of Hasidic schools based on ‘more than a dozen claims’ over a five-year period amongst some 50,000 students, while neglecting to mention that there were 16,671 such claims in New York City public schools over the same period—orders of magnitude greater, even accounting for the larger student size.”

Agudath Israel’s white paper on the story notes that the Times claimed to have interviewed more than 275 people, only “dozens” of whom “are still in the Hasidic community.”

“In other words, while The New York Times is opaque about precisely how many ‘dozens’ were interviewed, clearly the Times only spoke to a small percentage of the community it so heavily censured,” the organization’s white paper says.

Weinstock also faulted the Times for a headline suggesting that yeshivas are “Flush With Public Money,” which he said was justified only “by conjuring a large-sounding figure over four years, for tens of thousands of students, and including one-time stimulus funds.”

“In fact, these schools save taxpayers billions every year, shouldered by hardworking parents self-funding their children’s education because they want something different,” Weinstock told The Daily Signal.

Agudath Israel and many members of the Orthodox Jewish community have asked the Times to correct the record, to no avail, he said.

“The Times has ignored countless requests by Agudath Israel, by schools, and by hundreds of Jewish parents and students to correct the inaccuracies in its reporting, and asking the Times to report about their own lived experiences, only to fall on deaf ears,” Weinstock said. “Their voices were buried, except when the Times could not bury them.”

“After this four-month onslaught by one of the most powerful newspapers in the world, and after dialogue, diplomacy, and fact-checking have failed, we felt compelled to speak out,” he added. “There is an issue of suppression of free speech, and now an issue of endangering our physical security.”

“The New York Times has run over a dozen hit pieces against the Hasidic community in the past three months, using cherry-picked, agenda-driven sources, faulty metrics and bad data, while avoiding actual experts and those who represent the vast majority,” Rabbi Yaakov Menken, managing director of the Coalition for Jewish Values, told The Daily Signal.

“Done to any other minority, the Times itself would howl with outrage, but to the woke Times, the victims of the majority of New York’s hate crimes are privileged,” Menken added. “There’s simply no other way to describe it than as antisemitic propaganda.”

Although Democrats have a long history of championing the Jewish community, America’s increasing ideological polarization has alienated liberals from Orthodox Jews.

Orthodox Jewish schools have found themselves targeted by LGBT activists for their Torah-based stance against homosexual activity and transgender identity. One left-wing group has repeatedly targeted a prominent Jewish journalist, apparently accusing him of supporting white nationalism.

During the height of the COVID-19 pandemic, then-New York Gov. Andrew Cuomo, a Democrat, blamed the Orthodox Jewish community for upticks in coronavirus cases. Agudath Israel challenged some of Cuomo’s restrictions on the grounds that they discriminated on the basis of religion. Courts ruled in the organization’s favor.