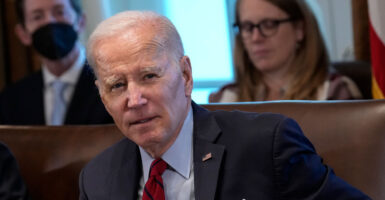 For about 20 minutes on Thursday, President Joe Biden suddenly pretended to care about the crisis at our southern border that his administration caused.

The Biden administration rolled out a new plan to expand the parole process for Venezuelans to Nicaraguans, Haitians, and Cubans; fast-track (many illegitimate) asylum cases at the border even more; and expand coordination with nongovernmental organizations for alien care; among other things. We’ll know even more details in the coming days as the Department of Homeland Security and Secretary Alejandro Mayorkas are expected to outline the specifics operationalizing Biden’s announcement.

During the course of his speech, the president unsurprisingly downplayed the danger of his disastrous policies thus far, shifted the blame for the border crisis to Republicans in Congress, and played the victim by claiming that he has not received enough of the outrageous and misplaced funding he repeatedly demands.

1. Claiming that he tried to pass a comprehensive plan to secure the border and fix the immigration system during his first days in office.

This did the opposite of securing the border and freeing up resources for the legal immigration system. Biden’s Department of Homeland Security’s own encounter numbers prove the effect of his detrimental policies month after month.  We have never seen these record-high numbers under any president in U.S. history.

2. Claiming that Congress rejected his recent requests for funding to “secure” the border.

Biden claims that he has “added hundreds of additional Border Patrol agents and installed new, cutting-edge technology.” In reality, his funding requests would continue to increase the surge of illegal aliens at the border. The increases and reallocations of funding simply add processing capacity. Meaning, get more illegal aliens into the country faster.

3. Claiming that illegal border crossers come to “flee oppression” as asylum-seekers and that “for many people, that’s what’s happening at our southwest border now.”

Illegal aliens crossing our border do not largely qualify for asylum under the law. True asylum-seekers look for relief from very specific grounds of persecution (namely “race, religion, nationality, membership in a particular social group, or political opinion”).

Fraudulent asylum claims have been rampant for some time (with up to 80% being denied under previous administrations). Many illegal aliens understandably want a better life or to find work in the Unites States, but that is not fleeing persecution and oppression. By filing bogus claims, they are jumping the line ahead of millions of legal immigrants patiently waiting for their turn.

4. Claiming that his “administration will continue to use that [Title 42] authority as the Supreme Court has required.”

The Biden administration has been actively fighting Title 42 since the beginning. Just as it did with the “Remain in Mexico” program, it has slow-walked its use even as the courts debated it with expulsion numbers dropping. The administration has not continued to use the authority as the court required, even as it has implemented mask mandates and vaccine requirements for the American people for the sake of “public health.”

5. Claiming that “the idea this is beyond our capacity, I just don’t buy.”

We continually see the disaster and ruin in border towns and cries to the president for help, even from mayors of blue cities complaining that they can’t support such a rapid influx of illegal immigrants. Mayors Muriel Bowser (Washington, D.C.), Eric Adams (New York City), Lori Lightfoot (Chicago), and others have realized their taxpayers cannot support all the health care, education, housing, transportation, and public benefits costs, and all have asked for federal bailouts. As always, America comes last for Biden.

Biden’s immigration policies have already proved to be disastrous and unsustainable, and now he wants to double down on them. As the old saying goes, “Insanity is doing the same thing over and over and expecting different results.”

The only change in Biden’s policy is this, after refusing to visit the border for years and saying there are “more important things going on,” Biden plans to finally do so this Sunday. It will be interesting to see what welcome he gets from hard-pressed border towns and demoralized federal agents.