20 Republicans Who Voted Against Kevin McCarthy for House Speaker 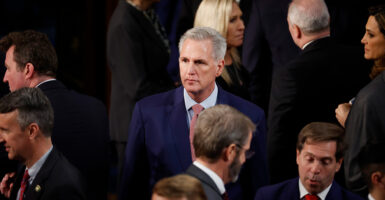 The next speaker of the House is still undecided after three rounds of voting Tuesday produced no clear winner.

House Republican Leader Kevin McCarthy failed to secure the majority of votes in any of the three rounds. The Californian received 203 votes in rounds one and two, and 202 in the third round, The Associated Press reported, making it the first time since 1923 that choosing a House speaker required multiple ballots.

A total of 218 votes is required to win the speakership.

House Democrats already had nominated Rep. Hakeem Jeffries of New York to be minority leader. Jeffries succeeds House Speaker Nancy Pelosi of California in leading Democrats as Republicans take a slim majority in the House following the results of the Nov. 8 midterm elections.

Jeffries, 52, received 212 votes for House speaker—nine more than McCarthy, 57—in the first round Tuesday, The Daily Signal previously reported. The New York Democrat received the same number of votes on the second and third ballots, Fox News reported.

Jeffries was elected to Congress in 2012 and his experience includes membership on the House Judiciary and Budget committees.

This is the second attempt by McCarthy, first elected in 2006, to become speaker. He served as House majority leader under two Republican speakers, Ohio’s John Boehner and Wisconsin’s Paul Ryan.

Voting for speaker will resume at noon Wednesday, Olivia Beavers of Politico tweeted.

Here are the 20 House Republicans who didn’t vote for McCarthy for speaker Tuesday:

Donalds voted for McCarthy in the first two rounds, but switched his vote in the third round to Rep. Jim Jordan, R-Ohio, who others also supported despite Jordan’s nomination of McCarthy on the second ballot.

“The reality is Rep. Kevin McCarthy doesn’t have the votes,” Donalds said in a tweet. “I committed my support to him publicly and for two votes on the House Floor. 218 is the number, and currently, no one is there.”

“When the dust settles, we will have a Republican Speaker [and] now is the time for our conference to debate and come to a consensus,” Donalds also wrote on Twitter.

Rep. Marjorie Taylor Greene of Georgia weighed in on fellow Republicans who were voting for Jordan for speaker.

“Jim Jordan does NOT want to be Speaker and nominated Kevin McCarthy on the House floor for Speaker and is voting for him every round,” Greene said in a tweet.

Gaetz, Rosendale, Norman, Biggs, and Good previously had said they would not support McCarthy’s speakership bid, the Washington Examiner reported. To reach 218 votes and become speaker, the Californian can’t lose the votes of more than four fellow Republicans.

Gaetz, who voted for Biggs in the first round but switched to Jordan for the second and third rounds, spoke to reporters just before the House began voting.

“Those of us who will not be voting for Kevin McCarthy today take no joy in this discomfort that this moment has brought. But if you want to drain the swamp, you cannot put the biggest alligator in charge of the exercise,” Gaetz said. “I’m a Florida man and I know of what I speak.”

In addition to the five Republican lawmakers who publicly opposed McCarthy’s speakership bid before the voting began, nine other Republicans—Perry, Gosar, Ogles, Luna, Crane, Roy, Bishop, Harris, and Clyde—expressed their concern about the California lawmaker in a New Year’s Day letter.

McCarthy made some concessions in a letter to fellow Republican lawmakers Sunday, including ending virtual participation and proxy voting, Fox News reported.

“Just as the speaker is elected by the whole body, we will restore the ability for any five members of the majority party to initiate a vote to remove the speaker if so warranted,” McCarthy said in the letter.

“Congress was never intended for Zoom, and no longer will members be able to phone it in while attending lavish international weddings or sailing on their boat. We will meet, gather and debate in person—just as the Founders envisioned,” the Republican leader added.