After Shoring Up Support, Paul Ryan Is Officially Running for House Speaker 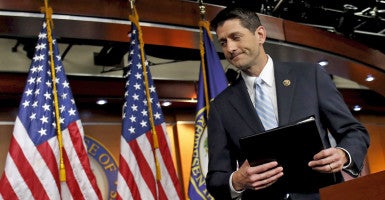 Rep. Paul Ryan is officially in the race for speaker of the House. In a letter to his Republican colleagues Thursday night, Ryan, R-Wis., the chairman of the House Ways and Means Committee, said he’s “eager and ready to be our speaker.”

On Wednesday night, a “supermajority” of the conservative House Freedom Caucus announced they would support Ryan, ensuring that he has the 218 votes needed to lock down the position.

Republicans will vote internally next Wednesday and the full House will vote next Thursday.

A hesitant and at times unwilling candidate, Ryan told Republicans he wasn’t initially interested in the position when Majority Leader Kevin McCarthy, R-Calif., withdrew from the race. Now, after two weeks of speculation and lobbying from his own party, Ryan says he’s “actually excited for this moment.”

Ryan wrote that the nation is “in a very serious moment,” and he believes “Washington is falling short—including the House of Representatives.” He added:

Working families continue to fall behind, and they are losing faith in the American idea: the belief that if you work hard and play by the rules, you can get ahead. At the same time, a weaker America has led to a more dangerous world.

Ryan said House Republicans “have an opportunity to turn the page, to start with a clean slate, and to rebuild what has been lost.”

He also seemed to address complaints of centralized power in Congress, writing that Republicans “can make the House a more open and inclusive body—one where every member can contribute to the legislative process.”

Ryan wrote that he’s eager to “tackle the country’s problems” and demonstrate “what a commonsense conservative agenda looks like.”

“I never thought I’d be speaker,” Ryan told Republican lawmakers, but “after talking with so many of you, and hearing your words of encouragement, I believe we are ready to move forward as one, united team. And I am ready and eager to be our speaker.

“This is just the beginning of our work. There is a long road ahead. So let’s get started.”