Psychotherapist: I Warned About Sam Brinton, the Nonbinary Biden Official Now Arrested for Theft, but No One Listened 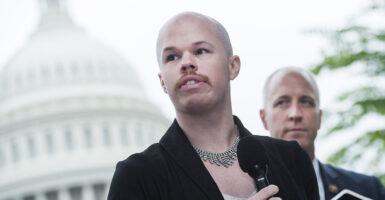 “My colleagues and I warned lawmakers in California and Massachusetts, and the LGBT activist groups which were sponsoring him, about Sam Brinton’s ever-changing story about abuse he allegedly underwent in therapy because of his LGBT attractions,” Dr. Joseph Nicolosi, Jr., the therapist and founder of the Reintegrative Therapy Association, said in a statement first reported by The Daily Signal. “But nobody cared, so Brinton’s testimony about his alleged experience played a key role in banning legitimate practices across the nation.”

California and Massachusetts went on to ban “conversion therapy,” a term the American Psychiatric Association defines as being “based upon the assumption that homosexuality per se is a mental disorder or that a patient should change his/her homosexual orientation.” The APA encourages legislation to “prohibit the practice of ‘reparative’ or conversion therapist that are based on the a priori assumption that diverse sexual orientations and gender identities are mentally ill.”

Yet many “conversion therapy” bans also effectively prohibit patient-directed talk therapy to address unwanted same-sex attraction or gender dysphoria, and psychotherapists like Nicolosi oppose them for this reason. They argue that patients should be free to bring up any issue in therapy, even if it involves questioning an LGBT identity. They do not support forced attempts to change sexual orientation through discredited practices like electroshock therapy.

Nicolosi says he practices “reintegrative therapy,” which he defines as client-driven talk therapy using “evidence-based treatment interventions” to “resolve traumas and addictions.” His organization states that “clients are not encouraged to try to change their sexual orientation, rather they resolve trauma and addictions using evidence-based treatment approaches. Changes in sexuality are the byproduct.”

Brinton testified in support of therapy bans, claiming that he suffered from “conversion therapy.” However, even LGBT activist Wayne Beson—who vehemently opposes “conversion therapy”—noted in LGBTQ Nation that Brinton’s story was “too good to be true” and faulted LGBT activist groups and the press for failing to verify it before championing his cause.

Beson asked Brinton for the identity of his “conversion therapist” and for the facility in which the “therapy” occurred. Yet Brinton demurred. Beson pondered, “Why was Sam Brinton the only survivor of conversion therapy I’ve encountered since 1998 who refused to answer these questions? Not only had every other survivor provided this information willingly, but they were eager to fight back and shut down their own therapist or ‘ex-gay’ minister.”

Before his time as deputy assistant secretary for spent fuel and waste disposition at the Department of Energy under President Joe Biden, Brinton served as vice president of advoacy and government affairs at The Trevor Project, an LGBT activist group.

“Sam Brinton’s story was always too good to be true,” Nicolosi told The Daily Signal. “But politicians and activists cared more about how he advanced their narrative than about ensuring that people understand that sexual fluidity goes more than just one way.”

“Brinton claims he was in torture therapy as a young child for years and can’t remember the therapist’s name,” the therapist said. “He later claimed the therapy took place in his twenties. But even as he was attacking therapies that don’t exist, he was engaging in sadomachism and simulated bestiality with young men and women. Of course, no one cared about his credibility until he got caught stealing luggage.” (Brinton claimed in a news release that he underwent “conversion therapy” at age 10, but he wrote in The New York Times that he suffered it at age 12, and when he was in his twenties, he told donors at a National Center for Lesbian Rights event that he suffered it “a couple years ago.”)

“Some of us warned long ago about his lies and behavior before it was popular, but Brinton’s story was too convenient for the narrative,” Nicolosi noted. “I doubt that the many states which have banned legitimate therapy will reverse course now that he’s been outed.”

The psychotherapist lamented the fallout from Brinton’s testimony, as legislators restricted access to therapy.

“Think of all the damage that was done, preventing people from accessing legitimate trauma therapy, because lawmakers relied on Brinton’s clearly suspicious testimony,” Nicolosi added. “There are individuals who are open-minded about exploring their sexual attractions. They want to explore heterosexuality in therapy. But because of these laws, which ban torture therapy that doesn’t exist among licensed therapists, those individuals can’t get help.”

“The laws Brinton backed are so broad that they throw the baby out with the bathwater,” Nicolosi argued. “Reintegrative Therapy is scientifically shown to decrease suicidality among men with same-sex attractions by addressing underlying traumas. Its evidence-based approach results in men increasing their heterosexual attractions and identity as a byproduct. Yet under California law, my patients’ right to legitimate, patient-led care is at risk.”

The Trevor Project and the Department of Energy did not immediately respond to a request for comment. This story will be updated with any response.