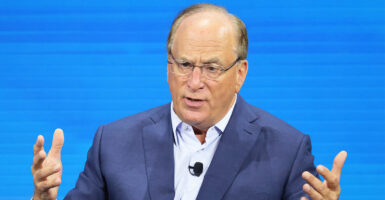 "A focus on ESG is not a focus on returns and potentially could force us to violate our own fiduciary duty," North Carolina State Treasurer Dale Folwell says. Pictured: BlackRock CEO Larry Fink during a New York Times event Nov. 30 at Lincoln Center in New York City. (Photo: Michael M. Santiago/Getty Images)

The state treasurer of North Carolina demands that BlackRock Inc. CEO Larry Fink “resign or be removed” immediately in a letter Friday to the board of directors of the multinational investment company.

“As keeper of the public purse, my duty is to manage our investments to ensure that the best interests of those that teach, protect and serve, as well as of our retirees, are always paramount,” North Carolina State Treasurer Dale Folwell says in the letter to BlackRock’s board.

“The North Carolina Retirement Systems (NCRS) have approximately $14 billion invested through BlackRock in various active and passive funds, in addition to around $55 million passively invested in BlackRock stocks or bonds,” writes Folwell, a Republican who won reelection in 2020.

Folwell cites what he calls Fink’s “pursuit of a political agenda” and his “focus on ESG,” an acronym for so-called environmental, social, and governance policies:

Unfortunately, Larry Fink’s pursuit of a political agenda has gotten in the way of BlackRock’s same fiduciary duty. A focus on ESG is not a focus on returns and potentially could force us to violate our own fiduciary duty. Ultimately, Fink’s continued ideological pressure could result in using ESG scores against states and local governments, lowering their credit ratings and thus driving up their cost of borrowing at taxpayers’ expense. This not only concerns me as the state treasurer but as chair of the North Carolina State Banking Commission and the Local Government Commission.

Will Hild, executive director of Consumers’ Research, applauded Folwell’s letter to the BlackRock board.

“I applaud North Carolina Treasurer Dale Folwell for calling out Larry Fink in a letter to their board and demanding he resign as CEO of BlackRock. Under Larry’s guidance, BlackRock has continued to push radical climate and social policies under the guise of an investment strategy,” Hild said in a statement.

“Treasurer Folwell’s call for Larry’s resignation highlights an opportunity for BlackRock to bring in a leader who will focus on its fiduciary duty instead of pursuing a political agenda,” Hild added.

Derek Kreifels, chief executive officer of the State Financial Officers Foundation, also applauded what he labeled as a “bold step” by Folwell.

“Treasurer Folwell’s bold step is a necessary one in the fight against the pernicious ESG agenda.  State financial officers across the country have taken steps to protect their citizens from those who would weaponize their investment dollars against them,” Kreifels said in a statement.

“Folwell is right to identify that BlackRock won’t change so long as Larry Fink remains at the helm,” he added.

According to a statement provided by BlackRock to The Daily Signal in an email, “BlackRock has consistently delivered for our clients and shareholders, including the citizens of North Carolina.”

“We value our relationship with the North Carolina Retirement Systems (NCRS) and are proud of the strong returns and significant value we deliver. We are also pleased NCRS is adopting our Voting Choice program so they can execute their proxy votes directly. Offering our clients choice is core to our mission,” the BlackRock statement said.

“Over the past year, BlackRock has been subject to campaigns suggesting we are either ‘too progressive’ or ‘too conservative’ in how we manage our clients’ money. We are neither. We are a fiduciary. We put our clients’ interests first and deliver the investment choices and performance they need. We will not let these campaigns sway us from delivering for our clients,” the statement said. The company added:

Clients continue to turn to BlackRock. In the U.S. alone, clients awarded BlackRock $84 billion of long-term net inflows in the third quarter and $275 billion over the last twelve months.

North Carolina’s Folwell, writing that he has “lost confidence in [Fink’s] leadership,” called for him to “resign or be removed.”

Larry Fink has personally guided BlackRock, the world’s largest asset manager, in its efforts to coerce the world’s companies, working with organizations such as Glasgow Financial Alliance for Net Zero, and Climate Action 100 in doing so. That activism is simply at odds with BlackRock’s duty to investors. Given his dogged pursuit of these political objectives over a number of years, I’m skeptical that he would or could lead the necessary course correction. Having lost confidence in his leadership to responsibly steward investors’ resources, I request, quite simply, that he resign or be removed from the asset management firm’s leadership team immediately.

“As Florida’s chief financial officer, it’s my responsibility to get the best returns possible for taxpayers. The more effective we are in investing dollars to generate a return, the more effective we’ll be in funding priorities like schools, hospitals, and roads,” Florida’s Patronis said in a press release.

Florida’s divestment will involve “$2 billion worth of assets,” according to the statement.

“As major banking institutions and economists predict a recession in the coming year, and as the Fed increases interest rates to combat the inflation crisis, I need partners within the financial services industry who are as committed to the bottom line as we are—and I don’t trust BlackRock’s ability to deliver,” said Patronis, who was reelected Nov. 8.

In the same statement, Patronis referenced Fink, BlackRock’s CEO, and a letter that Fink sent to other chief executive officers in January.

“BlackRock CEO Larry Fink is on a campaign to change the world. In an open letter to CEOs, he’s championed ‘stakeholder capitalism’ and believes that ‘capitalism has the power to shape society,’” Florida’s chief financial officer said.

“To meet this end, the asset management company has leaned heavily into environmental, social, and governance standards—known as ESG—to help police who should, and who should not, gain access to capital,” he added.

New York City-based BlackRock, the world’s largest investment house, has $8 trillion in assets under management. The company was “surprised by the Florida CFO’s decision,” according to a statement BlackRock emailed last week to The Daily Signal.

“As a fiduciary, everything we do is with the sole goal of driving returns for our clients. We are surprised by the Florida CFO’s decision, given the strong returns BlackRock has delivered to Florida taxpayers over the last five years,” BlackRock’s statement said.

“Neither the CFO nor his staff have raised any performance concerns. We are disturbed by the emerging trend of political initiatives like this that sacrifice access to high-quality investments and thereby jeopardize returns, which will ultimately hurt Florida’s citizens. Fiduciaries should always value performance over politics,” BlackRock’s statement said.

The company added of Florida’s move:

Today’s actions do not reflect the totality of our clients’ investment decisions. For example, U.S. clients awarded BlackRock $84 billion of long-term net inflows in the third quarter alone and $275 billion over the last [12] months. BlackRock is proud to have invested more than $65 billion into Florida’s economy on behalf of our clients. We also look forward to continuing to invest in and serve our clients in Florida.

Editor’s Note: This story has been updated to include a statement from BlackRock.