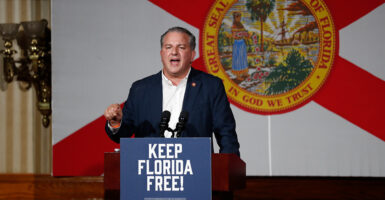 "I think it’s undemocratic of major asset managers to use their power to influence societal outcomes," Jimmy Patronis, Florida's chief financial officer, said Thursday about BlackRock. Pictured: Patronis speaks at a Republican campaign rally on Nov. 7, the day before he was reelected, in Orlando, Florida. (Photo: Octavio Jones/Getty Images)

Another state on Thursday announced that it would begin divesting its assets currently managed by investment giant BlackRock, accusing it of “[leaning] heavily into Environmental, Social, and Governance standards.”

The divestment will involve “$2 billion worth of assets,” according to the statement.

“As major banking institutions and economists predict a recession in the coming year, and as the Fed increases interest rates to combat the inflation crisis, I need partners within the financial services industry who are as committed to the bottom line as we are—and I don’t trust BlackRock’s ability to deliver,” said Patronis, who was reelected to the position on Nov. 8.

“BlackRock CEO Larry Fink is on a campaign to change the world. In an open letter to CEOs, he’s championed ‘stakeholder capitalism’ and believes that ‘capitalism has the power to shape society,’” Patronis said.

“To meet this end, the asset management company has leaned heavily into Environmental, Social, and Governance standards—known as ESG—to help police who should, and who should not, gain access to capital,” he added.

Whether stakeholder capitalism, or ESG standards, are being pushed by BlackRock for ideological reasons, or to develop social credit ratings, the effect is to avoid dealing with the messiness of democracy.

I think it’s undemocratic of major asset managers to use their power to influence societal outcomes. If Larry, or his friends on Wall Street, want to change the world—run for office. Start a nonprofit. Donate to the causes you care about.

“These taxpayer funds are invested by asset managers as part of Florida’s Treasury Investment Pool. By the beginning of 2023, the state treasury will have divested from BlackRock’s management of all short- and long-term investments and relocated investment responsibilities to other fund management entities,” the release said.

The New York City-based BlackRock, the world’s largest investment house with $8 trillion in assets under management, was “surprised by the Florida CFO’s decision,” according to a statement BlackRock sent to The Daily Signal via email.

“As a fiduciary, everything we do is with the sole goal of driving returns for our clients. We are surprised by the Florida CFO’s decision, given the strong returns BlackRock has delivered to Florida taxpayers over the last five years,” BlackRock’s statement said.

“Neither the CFO nor his staff have raised any performance concerns. We are disturbed by the emerging trend of political initiatives like this that sacrifice access to high-quality investments and thereby jeopardize returns, which will ultimately hurt Florida’s citizens. Fiduciaries should always value performance over politics,” the statement said. The company added:

Today’s actions do not reflect the totality of our clients’ investment decisions. For example, U.S. clients awarded BlackRock $84 billion of long-term net inflows in the third quarter alone and $275 billion over the last [12] months.

BlackRock is proud to have invested more than $65 billion into Florida’s economy on behalf of our clients. We also look forward to continuing to invest in and serve our clients in Florida.

Missouri took similar actions to Florida’s in October, when it announced it pulled its state pension funds of $500 million that BlackRock was managing, Fox Business reported.

“This is the right thing to do for Missouri state employees who rely on the assets managed by MOSERS for their retirement,” Missouri State Treasurer Scott Fitzpatrick said at the time. MOSERS refers to the Missouri State Employees’ Retirement System.

“Fiduciary duty must remain the top priority for investment managers—a duty some of them have abdicated in favor of forcing a left-wing social and political agenda that has failed to succeed legislatively, on publicly traded companies,” said Fitzpatrick, who won election to the state’s auditor position in November.

Louisiana also announced in October that it would be divesting from BlackRock.

“This divestment is necessary to protect Louisiana from actions and policies that would actively seek to hamstring our fossil-fuel sector. In my opinion, your support of ESG investing is inconsistent with the best economic interests and values of Louisiana,” Louisiana State Treasurer John Schroder said in a letter he wrote to Fink, Fox Business reported.

Jessica Anderson, executive director of Heritage Action for America, the grassroots arm of The Heritage Foundation, applauded both Gov. Ron DeSantis, R-Fla., and Patronis for their decision.

“Americans are tired of their own money being used against them by the green activists, radical culture warriors, and global elites who control massive financial institutions,” Anderson told The Daily Signal in an email. (The Daily Signal is the news outlet of The Heritage Foundation.)

“This is a great move by Governor DeSantis and Florida CFO Jimmy Patronis to hold those financial institutions, like BlackRock, accountable for their attempts to control American politics and society,” she added.

Through promoting woke ESG standards, BlackRock has shown that they prioritize the Left’s political goals over financial returns and investments for their clients.

Joining other states like Kentucky, West Virginia, Louisiana, and Missouri, Florida’s decision marks the largest divestment from BlackRock and underscores the message that our anti-ESG movement is only gaining momentum.