Same-Sex Marriage Bill Threatening Religious Freedom Heads to Biden’s Desk: Here Are the 39 Republicans Who Voted for It 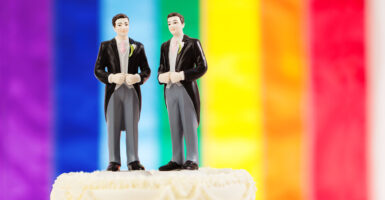 The Respect for Marriage Act passed the House this Thursday and is now headed to President Biden’s desk. (Photo: YinYang/Getty Images)

The House of Representatives gave final approval to the Respect for Marriage Act Thursday. The bill, which passed 258-169, is now headed to President Joe Biden’s desk.

Every single Democrat voted for the legislation, as did 39 Republicans. Most Republicans (169) voted against the measure, while 1 voted “present” and four did not vote.

The bill seeks to codify the Supreme Court’s 2015 ruling in Obergefell v. Hodges, which legalized same-sex marriage nationwide. Biden is expected to sign it into law.

The House previously voted to pass the Respect for Marriage Act in July. All Democrats voted in favor (220), while 157 Republicans voted against. Forty-seven Republicans joined their Democrat colleagues in voting for the bill.

Rep. Perry appears to have walked back on his decision to vote for the bill. Perry said in a November interview with Family Research Council President Tony Perkins that he did not have much information on the bill before it went up for a vote in July. “This bill did not come through committee in the House—it came directly to the floor,” said Perry. “We were given a choice, as we understood it… to vote either against traditional marriage or against interracial marriage.”

Perry explained he had to vote on the bill almost immediately. “I calculated incorrectly … that my long-standing support of traditional marriage would be understood, and I didn’t want to vote against interracial marriage.”

Remarking on the upcoming Senate vote, Perry said: “Now they’re going to offer some kind of amendment… but this literally destroys religious freedom.”

Twelve Senate Republicans who previously supported the bill joined all 50 Senate Democrats in voting for its final passage last week. Among these Republican senators were Roy Blunt of Missouri, Richard Burr of North Carolina, Susan Collins of Maine, and Mitt Romney of Utah.

Sen. Mike Lee, R-Utah, introduced a religious liberty amendment to the Senate version of the bill. “The [Respect for Marriage Act’s] leading proponents amended the bill by adding protections for religious service attendance and the solemnization of marriage,” Lee wrote in a November op-ed. “But those protections are inadequate to address many of the gravest risks posed by this bill, particularly those threatening the tax-exempt status of religious non-profits.”

Lee’s amendment, which garnered 48-49 votes, failed to meet the 60-vote requirement to pass the Senate.

“The House Rules Committee blocked my common-sense amendment to the so-called Respect for Marriage Act. In doing so, Rules Committee Democrats silenced the American people’s voice in the House chamber and put our fundamental rights in the crosshairs,” Roy said in a statement provided to The Daily Signal.

Roy said that “not a single committee held a hearing, heard from witnesses, or deliberated the details of this legislation” before the vote, so members of Congress “will be forced to vote up or down on a bill that they were not allowed to amend or even seriously debate.”

“No free American should have to live in constant threat of having their life upended and ruined in court for holding millennia-old religious beliefs,” Roy added. “Further, every Americans deserves to know whether their representative wants the federal government to target people of faith.”

Here are the Republicans who voted for the bill, according to preliminary reports. Most also voted for it in July, but some did not:

Here’s a list of House Republicans who previously voted for the bill but voted against it on Thursday:

Correction: An earlier version of this article incorrectly listed Tom Rice as switching his vote to oppose the bill.

Mary Margaret Olohan contributed to this report. This article may be updated to accurately reflect voting records.