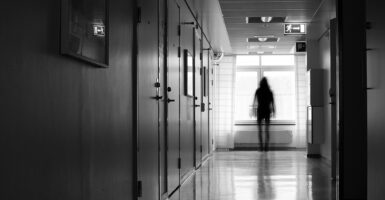 Today, there are believed to be more people trapped in slavery than at any other time in history. These are individuals who are victims of sex trafficking and forced labor. They are women, men, and children.

There are “27.6 million people [who] are estimated to be victims of trafficking,” John Richmond, the former U.S. ambassador to Monitor and Combat Trafficking in Persons during the Trump administration, says.

Tragically, governments around the world are “identifying less than half of 1% of all those victims every year,” Richmond says. “We are failing to actually identify, protect, and care for the victims of trafficking, and the traffickers are moving around with impunity.”

At the end of the day, human trafficking will only be stopped when the traffickers are stopped, he says.

“The root cause of the problem are the individuals who decide to exploit inherently valuable people just because they’re vulnerable.”

Richmond, who also an attorney and senior fellow at the Atlantic Council, joins “The Daily Signal Podcast” to discuss the core issues driving human trafficking today, and what is being done to rescue victims.

To learn more about how to be a part of the solution to solving human trafficking, visit the International Justice Mission or Love Does websites.