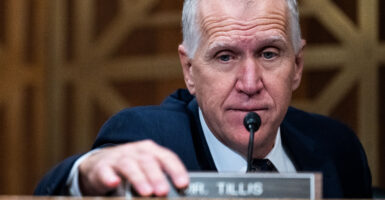 Why is Sen. Thom Tillis, R-N.C.—seen here at a Senate committee hearing on Sept. 15—co-sponsoring an immigration-reform bill that will do almost nothing to curtail the flood of illegal immigration pouring across the southern border? (Photo: Tom Williams/CQ-Roll Call/Getty Images)

If Sam Bankman-Fried offers a new cryptocurrency investment scheme, are you in? Not likely. I’d rather trust the ghost of Bernie Madoff with my money. Once bitten, twice shy.

That’s why conservatives don’t trust the immigration “compromise” proposals being discussed on Capitol Hill in the lame-duck session of Congress just weeks before control of the House switches (barely) into Republican hands.

This week, The Washington Post and The Wall Street Journal both praised one proposal by Sens. Tom Tillis, R-N.C., and Sen. Kyrsten Sinema, D-Ariz. Their “Bipartisan Border Solutions Act” would reportedly involve trading an amnesty for nearly 2 million adults brought here illegally as minors for (1) extending Title 42 for a year, (2) more border-processing centers, and (3) more enforcement, including deportation.

The Post’s editorial page is always hard to distinguish from White House press secretary Karine Jean-Pierre’s briefing binder, but The Journal ought to know better than to tout these shabby wares.

Let’s take them one by one.

Title 42 is a health measure that was effective during the COVID period in preventing illegal entry, as it doesn’t allow would-be migrants to wait out their lengthy process from inside the United States. President Joe Biden’s Department of Homeland Security used it only reluctantly, and now a federal judge in Washington has ruled Title 42 can’t be used after Dec. 21.

Even if it is extended for a year by law, what about after that? COVID is only a permanent crisis for the Biden administration when it needs it to give away benefits and dump student loans on taxpayers. What the U.S. needs is a law to repel illegal crossers and triage asylum claims outside our borders through “safe third country” agreements.

The Tillis-Sinema deal reportedly proposes at least four more southern border processing centers to expedite credible fear and asylum interviews. However, recent history tells us that they would fill up as fast as they were built, forcing the DHS to return to its current process, parole, and punt system, where illegal migrants are released after a few days.

Biden’s DHS knows that most current arrivals will fail to gain asylum, so they want them putting down roots as fast as possible on the off chance an enforcement-minded U.S. government is one day elected.

Even with greater resources, the combined backlog of 10 million cases of the U.S. Citizenship and Immigration Services and the Department of Justice’s immigration courts would take several years to eliminate, but only if the flow stopped. The new centers, and up to $40 billion proposed to increase resources, are just likely to end up feeding the “Mayorkas Migration Machine” to bring illegals off the border, note their basic information, and send them inland into immigration limbo.

Enforcement is the least credible promise of them all. Since his inauguration, Biden has been beholden to the far left of his party on immigration. He undid every effective Trump-era policy, from “Remain in Mexico” to agreements with central American countries and building physical barriers.

DHS Secretary Alejandro Mayorkas told his staff to minimize enforcement, effectively leaving alone all but the worst criminal aliens. Deportation under Biden has dropped from 185,000 in fiscal 2020 to 59,011 in 2021 and 69,019 in 2022—from about 30 deportations per ICE enforcement agent yearly down to 10.

Remember, more than 200,000 people illegally entered the U.S. last month alone, and about half of those are still here. Mayorkas, under the neglectful eye of supposed border czar Kamala Harris (remember her?) evidently has no intention of expanding enforcement, even of rejected asylum claimants, no matter how much money or how many shiny new buildings he gets.

Unfortunately, trusting Democrats to keep their side of an immigration bargain is like the world trusting Argentina not to default on its bonds, or France trusting the Germans not to come through Belgium. Historically speaking, it’s a bad bet.

When it comes to immigration, the Biden administration lies with impunity. Jean-Pierre said Biden had visited the border, but he hasn’t. Mayorkas has said that the border is “secure,” but there’s no definition of “secure” under which that’s true.

Administration officials talk about an immigration system that is “safe, orderly, and humane,” but 782 people have died attempting to enter illegally, more than a million “got-aways” came in without inspection at all, and applicants for legal immigration services are waiting years longer than before.

Washington Post columnist Henry Olsen wrote that President Ronald Reagan was willing to compromise and make a deal. He was, and as an honorable man, Reagan expected the other side to keep the bargain. The deal he struck with Democrats, the 1986 Immigration Reform and Control Act, was supposed to trade amnesty for illegal aliens for a national program to enforce employment law.

Making sure job applicants were legally present would have taken away the major lure for illegal entry and protected American citizens’ jobs from unfair competition. But though Republicans helped pass the law and 2.7 million illegal aliens got amnesty, workplace enforcement never really happened.

A 2005 report concluded that “the data show employer sanctions enforcement activities have dropped to levels that cannot reasonably be expected to create an effective deterrent to the employment of unauthorized immigrants,” and it’s gotten worse since then.

Until Democratic politicians credibly commit to measures that will work, such as sealing the border, processing asylum cases outside of the country, detaining illegal entrants, and credible enforcement in the interior, Republicans should steer clear of any deal where Democrats get the gold mine and they again get the shaft.