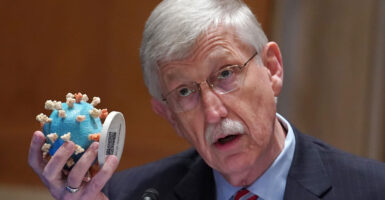 Then-National Institutes of Health Director Dr. Francis Collins—seen here holding up a model of the coronavirus at a Senate subcommittee hearing May 26, 2021—pressured Moderna into delaying the release of its COVID-19 vaccine because he wanted more minorities in its clinical trials. (Photo: Sarah Silbiger/Getty Images)

One of the last things Francis Collins, then-director of the National Institutes of Health, did before retiring was to pressure Moderna into delaying the release of its COVID-19 vaccine because he wanted more minorities in its clinical trials.

Moderna’s CEO, Stephane Bancel, was happy to oblige him, saying that diversity “matters more to us than speed.”

That decision was not based on science, and it likely cost lives. A new study by law professor Michael Conklin, and a new book by another law professor, David Bernstein, explain why.

The race labels that we are all familiar with—black, white, Asian, Hispanic, etc.—are not scientific.  Quite the contrary, Bernstein traces their origins to “a combination of amateur anthropology and sociology, interest-group lobbying, incompetence, inertia, lack of public oversight, and happenstance.” They have no basis in biology, tell us nothing about genetics, and are therefore useless to medical research.

For that reason, when the federal government standardized our race labels in 1977, it said that they “should not be interpreted as being scientific or anthropological in nature.” Since then, scores of scholars and researchers have warned that our arbitrary labels should never be used in medical research.

But the bureaucrats at the Food and Drug Administration and National Institutes of Health, and the leadership of at least one of our major pharmaceutical companies, ignored them.

Conklin explains that “there is no statute or regulation that explicitly mandates pharmaceutical trials reach any racial quota among their study participants,” but the FDA requires companies to gather such data and “recommends” that they submit it when seeking approval for new medicines.

The FDA claims that “[e]nsuring people from diverse backgrounds join clinical trials is key to advancing health equity.” But, as any doctor or medical researcher who isn’t blinded by ideology will tell you, it isn’t.

Ideology, however, trumps science for many on the left.

Take Harvard Medical School professor Farrah Mateen, for example. In a 2021 paper, she called for racial quotas in medical trials to advance “health equity” even while admitting that “[r]ace is a social construct, a poorly defined marker of genetic diversity, and an imprecise proxy for the relationship between genetics and ancestry.”

In truth, our arbitrary race labels are utterly useless to the science of medicine, which needs to understand how drugs will react to biological and genetic traits.

To give an example of how useless race labels are for medical research, consider the category “black.” According to U.S. law, “black” is anyone descended from one of the black tribes of Africa. The race-obsessed, like Collins, Bancel, or Mateen, might think that this category tracks at least somewhat reliably with biological and genetic traits. After all, they might say, all these people trace their origin to one continent and share a skin color.

Genetic diversity is a lot more than skin color. Not that the race-obsessed care.

If our medical experts, bureaucrats, and drug manufacturers were interested in science, they wouldn’t use our arbitrary race labels in medical research. And if they cared about saving lives, they wouldn’t have delayed the rollout of a COVID-19 vaccine so that they could increase the color diversity of clinical trials.

People likely died because of Moderna’s decision to delay its vaccine. We’ll never know how many. But even if we did, it wouldn’t change these people’s behavior. Reality finds no purchase in the minds of the race-obsessed.

Other arguments against the use of our race labels in medicine probably wouldn’t dissuade them either, but there are many more. Conklin explains, for example, that using skin color as a proxy for actual genetic difference reinforces false and harmful stereotypes, such as that “blackness” is associated with “the presence of medical defects.”

It may also reinforce the false belief among hate groups that people with one skin color are racially inferior to people of another.

These are good arguments, too, but they will fall on deaf ears.

The key, then, to preventing people like Collins and Bancel from killing anyone else with their unscientific nonsense is to deny them the power to do it.

Congress, the courts, and state governments must deny these people the power to divvy us up on the basis of race. And Congress, especially, must stop giving its power to bureaucrats who are happy to sacrifice their credibility—and American lives—on the altar of their ideology.