‘15 Days’ to 2 Years: How Power Corrupted Our Public Health Bureaucrats 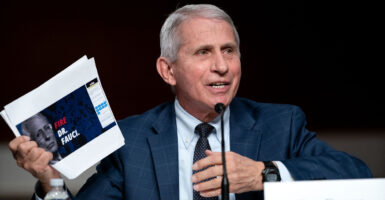 Our public health officials have forgotten that during a state of emergency is when civil liberties must be safeguarded the most. Pictured: Dr. Anthony Fauci, White House chief medical adviser, shows a screen grab of a campaign website while answering questions from Sen. Rand Paul, R-Ky., during a Senate Health, Education, Labor, and Pensions Committee hearing on Jan. 11. (Photo: Greg Nash/Pool/AFP/Getty Images)

Paul makes it clear that his priority is not merely administrative reorganization but the removal of the nation’s “dictator in chief” who has exercised “unilateral authority to make decisions for millions of Americans.”

Still, Paul’s move puts a spotlight on the outsized role that America’s public health czars—from Fauci to Francis Collins to Rochelle Walensky—have played in undermining civil liberties in the name of the public health.

It is one thing to temporarily engage emergency powers for, say, 15 days to mobilize against an unforeseen threat to public safety, it is another to extend them for years even as medical improvements continually reduce the public danger.

It is worth recalling Fauci’s comments in response to questions from Rep. Jim Jordan, R-Ohio, about health measures amidst the pandemic: “I don’t look at this as a liberty thing … just as a public health thing.”

He was wrong. It is both, as is every emergency. In every emergency, government officials face the temptation to restrict civil liberties in the name of safety. That’s why the Supreme Court has said that the Constitution “covers with the shield of its protection all classes of men, at all times, and under all circumstances” and that none of its protections “can be suspended during any of the great exigencies of government.”

The context for the quote, by the way, was the Civil War.

If you were paying attention to Fauci over the course of the pandemic, you could watch him succumb to the temptation to sacrifice liberty for security in real time.

In August 2020, Fauci said of vaccine mandates, “You don’t want to … try and force someone to take the vaccine,” and that although it was permissible for certain groups, “we’ve never done that … for the general population.”

Fast forward a year or so, and Fauci succumbed to the temptation that haunts every weak-willed bureaucrat, saying that we needed a vaccine mandate because it would be “another incentive to get more people vaccinated.” Sure enough, the government went on to issue a nationwide vaccine mandate despite lacking the legal authority to do so.

What our public health czars failed to appreciate is that civil rights are most essential during emergencies, because during those times, the government is most likely to try to reduce or eliminate them. In past emergencies, for example, the government has claimed the power to throw Americans into internment camps, nationalize the steel industry, and spy on citizens, among other abuses.

During the pandemic, the federal government has suffered a barrage of defeats as the courts have, for the most part, refused to let Fauci and others trample civil rights.

In Alabama Association of Realtors v. Department of Health & Human Services, the Supreme Court struck down a nationwide eviction moratorium issued by the Centers for Disease Control and Prevention, which had claimed “broad authority to take whatever measures it deems necessary to control the spread of COVID–19.”

Banning evictions is obviously in the toolbelt of health authorities, right?

In reality, the government’s defense of that claim was so far-fetched that the Supreme Court characterized it as a “wafer-thin reed on which to rest such sweeping power.” That characterization applies to almost all of this administration’s emergency actions.

This flagrant breach of executive authority is not only outrageous in and of itself, but inconsistent with judicial precedent on emergency powers and administrative authority.

In Youngstown Co. v. Sawyer, the Supreme Court refused to let the president effectively write new laws to nationalize the steel industry. Yet, that is exactly what President Joe Biden tried to do by issuing the Occupational Safety and Health Administration vaccine mandate.

In this case, the Supreme Court made the sensible choice in declaring the mandate unlawful, given that Congress never gave OSHA that power.

In a ringing indictment of the administration’s attempt to expand federal power, Justice Neil Gorsuch said, “If this court were to abide [the law’s demands] only in more tranquil conditions, declarations of emergencies would never end and the liberties our Constitution’s separation of powers seeks to preserve would amount to little.”

Despite all the constant reminders that civil liberties don’t disappear during emergencies, our public health czars succumbed to temptation at every turn. Walensky heaped praise on “what lockdowns were able to do in other countries,” specifically celebrating China’s “really strict” lockdowns even though China’s official COVID-19 statistics are not trustworthy.

Similarly, Fauci declared that “mandating vaccines for children to appear in school is a good idea,” even though COVID-19 poses a minuscule risk to children. And Collins said that the government should “track down” and impose “some kind of justice” on people spreading allegedly misleading claims about COVID-19.

That last claim is especially egregious and hypocritical given that these very officials who claim to be arbiters of COVID-19 truth have spread inconsistent and even false information.

Fauci, for example, has admitted to lying to the American public about the efficacy of masks, and has been caught telling other lies about the pandemic response, as well. Research by scholars at Johns Hopkins University, meanwhile, has debunked Walensky’s claim that lockdowns have been good.

Our health czars have succumbed so completely to the temptation to restrict civil liberties that even as new information, innovation, and research has reduced the risk of the pandemic, their rhetoric has endorsed more restrictions.

In August 2021, Collins threw his support behind vaccine mandates of any sort. As late as last November, Fauci declared that Americans should be ready to do “anything and everything” to curb the spread of the omicron variant.

Even now that a large majority of the country is vaccinated, many people have developed natural antibodies, vaccines and treatments are proliferating, and hospitals are well-experienced and equipped to deal with COVID-19, Fauci still says we must be prepared to snap back to “any degree of mitigation” if there is another wave.

Have these power-hungry bureaucrats learned nothing at all?

What is especially sad about this entire saga is that all of these public health officials were, at one point, highly respected nonpartisan experts whom Americans respected in a crisis. The problem arose when they decided not merely that they had relevant expertise to offer, but that they had the power to dictate our daily lives for years.

The pandemic reminded us that in every emergency, there are public officials who will succumb to the temptation to restrict liberty in the name of security. It also proved a tenet that conservatives have long known—and liberals have recently forgot—power corrupts, and absolute power corrupts absolutely.