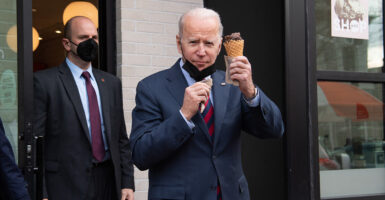 Texas House Republicans presented their plan to secure America’s southern border, and one of them attacked President Joe Biden for misplaced priorities on the issue.

“We developed this framework by Texans, for Texans to secure our southern border,” Arrington said. He added that the plan is in line with House Republicans’ “Commitment to America,” a GOP plan that aims to create and foster a safe nation, a strong economy, a government accountable to its people, and a future built on freedom.

Rep. Chip Roy told reporters outside the U.S. Capitol building that securing the border requires physical infrastructure and enforcing “the policies of the United States.”

“You cannot encounter and release – you must be able to detain, and or turn away in order to stop the flow that is devastating lives,” Roy said.

To secure the border, Roy said, “you have to enforce the laws in the interior of the United States, and you have to target the cartels that are exploiting our laws and exploiting human beings for profit and endangering the American people in the process.”

The Texas GOP House delegation listed the four tenets of the plan on a large poster as members gave brief remarks addressing the current situation at the border and pledging to do all in their power to pass legislation to secure the southern border.

The Texas Republican delegation’s “Commitment to Secure the Border” urges the government to:

Biden has not visited the border since taking office. Biden traveled to Arizona Tuesday to visit a building site for a new computer chip plant. Before leaving the White House, Fox News’ Peter Doocy asked the president why he was not traveling to the border on his trip.

“Because there are more important things going on,” Biden said. “They are going to invest billions of dollars in a new enterprise in the state.”

Rep. Dan Crenshaw questioned Biden’s comment during the press conference Thursday, asking, “Is our sovereignty as a nation not important? Is 80,000 deaths a year from [the] fentanyl crisis not important?”

The Biden administration “will not enforce the laws that are on the books,” Crenshaw said. “They don’t seem to care about what border patrol goes through. They don’t seem to care about what our border counties go through – according to Joe Biden, none of this is important enough. What is important, is at least eight public visits to get ice cream. That is apparently what this person prioritizes.”

U.S. Customs and Border Protection has also seen an increase in the amount of fentanyl smugglers attempting to bring drugs across the border. In fiscal year 2022, the agency reports that it seized 14,700 pounds of fentanyl, a highly lethal opioid.

During a recent trip to the southern border, House Minority Leader Kevin McCarthy pledged that “those responsible for this disaster will be held accountable,” adding that if “Mayorkas does not resign, House Republicans will investigate every order, every action and every failure to determine whether we can begin impeachment inquiries.”

Mark Morgan, former acting Customs and Border Protection commissioner and a Heritage visiting fellow, said in a recent press release that Mayorkas “took the most secure border in our lifetime and intentionally, unsecured it.” (The Daily Signal is the news outlet of The Heritage Foundation.)

“In less than two years, there have been more than 4.4 million encounters of illegal and inadmissible aliens and more than 1 million known got-aways crossing our borders,” Morgan said.

The agent was tracking a group of illegal aliens and died Wednesday when he hit a closed fence on an ATV, Fox News reported.

“He died for you and for me, for your children and for my children, and to keep us safe,” De La Cruz said of the agent. “Texans are on the frontlines of this crisis, and we deserve better, you deserve better. This is an open-border crisis caused by the Biden administration.”

Because an open border is unsafe, De La Cruz said, she and her GOP Texas colleagues “stand committed to securing our southern border and getting our border patrol agents the resources that they need.”