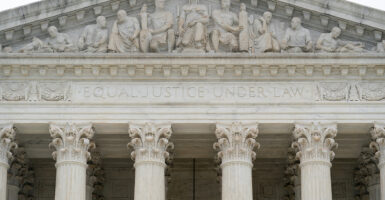 "So, what these cases involve is, basically at the heart is racial discrimination," says Lance Izumi. Pictured: The U.S. Supreme Court heard arguments on the use of affirmative action in college admissions on Oct. 31. The lawsuits were brought forward by Students for Fair Admissions, a nonprofit membership group, against admissions policies at the University of North Carolina and Harvard. (Photo: Liu Jie/Xinhua/Getty Images)

The U.S. Supreme Court’s many cases this term include two that pertain to affirmative action in college admissions.

“So, what these cases involve is, basically at the heart, is racial discrimination,” Lance Izumi, a senior director of education studies at the Pacific Research Institute, told The Daily Signal. “What Harvard and UNC have done, at least it’s alleged by the plaintiffs, is that they have used their admission system to specifically keep down the numbers of Asian Americans who are being admitted into those two institutions.”

“And so, in the case of Harvard, for example, they have used race as a factor, has been allowed under previous Supreme Court rulings, but have used it in a way that basically sets a quota on the number of Asians who are being admitted into Harvard,” adds Izumi, who is also the author of the book “Obama’s Education Takeover.”

And if you change that Asian American to [an] African American, again with the same characteristics, that person would then have a 95% chance of getting into Harvard.

Izumi joins “The Daily Signal Podcast” to discuss the Supreme Court cases, the potential impact of these cases, record-low ACT scores, and what he hopes the next Congress will accomplish on education policy.