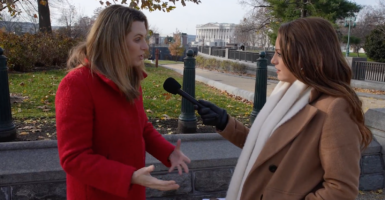 A Virginia restaurant told the Family Foundation that it was no longer welcome to dine at the establishment because of the organization’s views on abortion and traditional marriage.

The Daily Signal spoke with Family Foundation President Victoria Cobb on Monday morning outside the Supreme Court as the justices heard oral arguments in 303 Creative v. Elenis, a case examining “whether applying a public-accommodation law to compel an artist to speak or stay silent violates the free speech clause of the First Amendment.”

Cobb shared that about an hour and a half before the Family Foundation party was scheduled to take place in a private dining room at Metzger Bar and Butchery located in Richmond, Virginia, the restaurant announced that was “unwilling to serve” the organization.

“They did a little research, found out who we are. We are unapologetically pro-life and stand for traditional marriage,” she explained.

Cobb said the owner of the restaurant then called and informed the Family Foundation that it was no longer welcome to hold an event at the establishment.

“They seem more than willing to defend their ability to deny access to food. That’s, I think, the stunning part about it, we’d like to think that in America, even though we have political differences, even though we don’t see the world the same day, we’d like to believe that we can all dine in the same places,” Cobb said.

“Metzger Bar and Butchery has always prided itself on being an inclusive environment for people to dine in. In eight years of service we have very rarely refused service to anyone who wished to dine with us,” the restaurant said in a statement provided to The Daily Signal.

“Recently we refused service to a group that had booked an event with us after the owners of Metzger found out it was a group of donors to a political organization that seeks to deprive women and LGBTQ+ persons of their basic human rights in Virginia,” the statement continued. “We have always refused service to anyone for making our staff uncomfortable or unsafe and this was the driving force behind our decision. “

“All of our staff are people with rights who deserve dignity and a safe work environment,” the statement continued. “We respect our staff’s established rights as humans and strive to create a work environment where they can do their jobs with dignity, comfort and safety. We hope you will understand our decision as we understand it is your choice to dine with us or not.”

Cobb said Americans should be shocked at such behavior.

“We all need to [have a] heightened sense of awareness that that is the polarized environment that is now created,” said Cobb. “We really need to simply be willing to be brave and still hold our views and not let this chilling effort take place for those who believe things that maybe aren’t mainstream in some secular circles.”

“Most Virginians are happy to sit down and have meals with people they disagree with. This just doesn’t reflect the heart of the freedom that we want to see in our culture and our society,” she added.