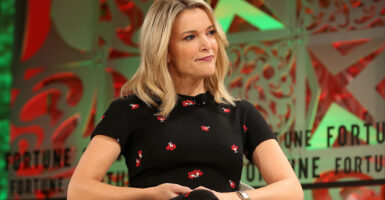 The fashion brand Balenciaga quit Twitter less than a month after entrepreneur Elon Musk took charge of the social media platform. The company has yet to say why it left Twitter, but some saw the brand’s decision as a political statement over the “free speech” direction in which Musk says he is taking Twitter.

While Balenciaga appears to have ditched Twitter over concerns about the priorities of its new CEO, the brand seems to have no problem sexualizing children to sell products.

On her podcast Tuesday, conservative pundit Megyn Kelly said Musk’s taking over Twitter was “too much for [Balenciaga] and their high-ground moral principles, because they were too busy exploiting 4-year-olds for cash on the couch.”

In one Balenciaga ad, the teddy bear wears a bondage harness and a choker. Wine glasses are on a table in front of the child pictured. In the other ad, the child holds a teddy bear wearing a choker around its neck with a large lock.

The fashion company also has come under harsh criticism for an ad promoting a handbag that ranges in price from $3,450 to $4,000. The ad showcases the bag tossed on an office desk laying on top of papers, including what appears to be a 2008 Supreme Court ruling in a child pornography case.

Balenciaga has removed the offending ads and issued an apology, but that’s not enough.

Balenciaga engaged in the sexual exploitation of children, and as a leader in the fashion industry, the company must do more than offer “sincere apologies.”

It’s time for Balenciaga to take a close look at the people creating its ad campaigns and designs, as well as the leadership team that approved the campaign.

On today’s edition of the “Problematic Women” podcast, we discuss the Balenciaga controversy, and why celebrity entrepreneur Kim Kardashian is coming under fire amid the scandal.

Also on today’s show, we explain what is happening in China with protests over COVID-19 lockdowns, and why protesters are holding up white pieces of paper.

Plus, the Supreme Court will hear arguments Monday in a critical free speech case involving a graphic designer who says she doesn’t want to be forced to endorse same-sex marriage. We’ll tell you what you need to know.

And as always, we’ll crown our Problematic Woman of the Week.