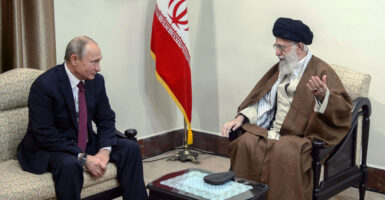 Caitlyn Wetzel is a student at Liberty University majoring in national security, an intern with The Heritage Foundation’s Center for National Defense, and a member of Heritage's Young Leaders Program.

Press reports suggest that Iran—in addition to already providing armed drones to Russia—is in the process of transferring short-range ballistic missiles, such as its Fateh and Zolfaghar systems, to support Moscow’s unjust war in Ukraine.

Those expected Iranian ballistic missile transfers to the Kremlin would allow Russia to continue its unprovoked aggression against Ukraine, aiding and abetting Moscow’s targeting of civilian and critical infrastructure targets as the bitter cold of Eurasian winter rolls in.

Equally worrisome, the Iranian arms sales to Russia’s war effort will also potentially bring significant benefits to Tehran, which, with its involvement in Ukraine, is now spreading its influence beyond its traditional troublemaking in the Middle East.

For instance, Tehran’s support to Russia in its time of need will tighten bilateral ties with Moscow. Russia will certainly look kindly toward Iran in the (stalemated) Iran nuclear deal negotiations, at the United Nations, and on the global oil market.

There’s also reason for concern that Moscow will be helpful to Iran on a range of military research and development programs that will aid the capabilities of Tehran’s military and the Iranian Revolutionary Guard Corps.

Of course, Iran will almost certainly get operational feedback on the performance of its armed drones and, eventually, its ballistic missiles in the war. Iranian advisers are reportedly forward-deployed to Russia and Crimea to train Russian troops on drone operations.

Those invaluable insights will potentially allow Tehran to improve the effectiveness of its weapons—not only for its own use, but for that of its allies and armed proxies against their individual and mutual enemies, including the U.S. and Israel.

If Iranian weapons perform well in Russian hands, it could also improve interest in international sales of Tehran’s arms and increase military R&D cooperation, including from, and with, the likes of North Korea.

And while the details of Iranian missile transfers to Russia are not well-known, it can expected that there is at least some movement of hard currency from Moscow to Tehran, refilling the repressive regime’s dwindling coffers.

Those revenues will unquestionably support the regime’s domestic crackdown on dissent, its international adventurism (e.g., Yemen and Syria), its terrorist allies (e.g., Hezbollah and Hamas), its armed proxies (e.g., Iraq), and its burgeoning nuclear (weapons) program.

Due to its poor military performance to date and Ukraine’s incredible courage and resilience, Russia’s war on Ukraine is in need of a “boost”—possibly in the form of Iranian short-range ballistic missiles.

Those Iranian missile transfers, if they occur, would serve to increase the violence and bloodshed in Ukraine—and, equally unfortunately, will broadly advance Iran’s worrisome, anti-West national interests, too.