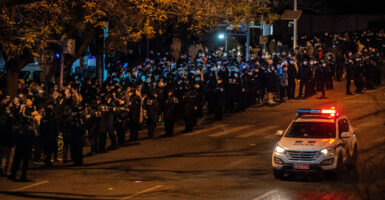 Protesters and police gather during a protest on Monday in Beijing against China's strict "zero-COVID" measures. To mollify the Chinese communist government, Apple disabled its Airdrop function, which severely hamstrung demonstrators' ability to communicate with one another. (Photo: Kevin Frayer/ Getty Images)

This week, the Chinese government activated its vast censorship apparatus to prevent dissemination of news regarding thousands of citizens taking to the streets to protest the Chinese Communist Party’s “zero-COVID” lockdowns.

China has developed the world’s most sophisticated and invasive surveillance scheme: According to The Wall Street Journal, police have been dispersing to the sites of protests ahead of time thanks to their monitoring of internet traffic, cellphone data, and messaging apps. China also has access to data from hundreds of millions of cameras, “some equipped with facial-recognition software … . The government has enhanced these capabilities over the past two years as part of contact-tracing efforts to control the spread of the virus.”

Such compulsion becomes necessary when a tyrannical government presides over an increasingly unhappy population.

Chinese dictator Xi Jinping despises capitalism. In fact, he despises it so much that he has undercut the durability of his own economy in a bizarre quest to pursue a form of authoritarian mercantilism. The result has been slower economic growth, shoddy product innovation, and extraordinary levels of debt, all piled atop an aging demographic time bomb. He has sought to make up for this through higher levels of compulsion domestically, combined with stealing technology from the West and utilizing military power to simply take over areas like Hong Kong.

Chinese tech companies have been brought to heel: As The New York Times reported in July 2021, Chinese “companies and entrepreneurs are effectively telling the government that they know who the master is.”

But Xi hasn’t stopped there.

Xi has taken advantage of the weak underbelly of capitalism—the reality that profit-seeking enterprises will allow themselves to be co-opted by malevolent actors in order to maintain their profitability, that corporations are not predominantly concerned with American national security, but with economic efficiency.

This is why Apple is now reportedly doing the bidding of the Chinese government.

Apple, which bases its manufacture of the iPhone, among other devices, in China—to the point where 25% of the value of the iPhone apparently comes from Chinese companies—is completely subject to Chinese whim, and they know it.

That’s undoubtedly why Apple cut off its Airdrop feature in its latest Chinese update, just before the anti-lockdown protests broke out. Airdrop allows users to transfer data using wireless connections rather than the internet, which avoids governmental scrutiny.

Apple isn’t a rarity. Multiple major companies have had to make the choice between access to China’s markets and labor resources, and standing against Chinese autocracy. Some companies have withstood the test—but not enough of them.

Meanwhile, the West is focused, laserlike, on Elon Musk’s Twitter as the supposed threat to democracy. This week, the EU announced that Twitter could be in violation of the Digital Services Act, which forces social media platforms to police “hate speech.” The White House has also announced that it has its “eye” on Musk’s Twitter, which it says has now become a font of “misinformation.”

Musk has dedicated Twitter to opening up standards of speech, allowing those with non-lawbreaking activity to tweet.

This has raised the hackles of our thought leaders—but not Apple actively doing the work of suppressing sharing of information in authoritarian China.

All of this bodes ill for the future of the digital age in the West. If the West is perfectly sanguine about tyrannical regimes weaponizing capitalism and technology while fretting over capitalists who own technology companies broadening the use of their platforms, the West will be contributing to its own defeat. And China will celebrate.