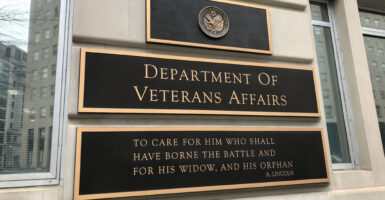 The federal program with the worst track record of improper payments in 2021 was the Department of Veterans Affairs’ long-term services and supports, which properly paid only 27%, or $708 million, out of $2.6 billion in total payments. (Photo: Kiyoshi Tanno/iStock/Getty Images)

The Inflation Reduction Act gives the IRS an additional $80 billion to hire 87,000 more agents with the hope of bringing in about $200 billion in additional tax revenues over the next 10 years. But in 2021 alone, the federal government spent $279 billion of taxpayers’ money on improper payments.

This glaring double standard—cracking down on taxpayers who have to navigate a 7,000-page tax code as the federal government fails miserably at making the proper payments in the programs it designs and administers itself—shouldn’t exist.

At a cost of more than $2,000 per household, Americans are paying more for bureaucrats to send faulty payments—to the wrong people or in the wrong amounts—than they are for some of the core functions of the federal government.

Improper payment rates across most of the federal government’s 78 reported programs are high enough to put any private sector company out of business. But a handful of large programs account for the vast majority of improper payments.

The program with the worst track record in 2021 was the Department of Veterans Affairs’ long-term services and supports, which properly paid only 27%, or $708 million, out of $2.6 billion in total payments.

Improper payments mean taxpayers pay more and beneficiaries receive less. Had those VA payments been properly paid, up to four times as many veterans could have received services, or taxpayers could have saved billions of dollars.

Moreover, the $279 billion in improper payments for 2021 is an understatement. It doesn’t include improper payments in some of the most problematic programs, such as Obamacare subsidies and the disastrous Pandemic Unemployment Assistance program.

Pandemic unemployment insurance programs will likely go down as the biggest fraud in U.S. history. Unfortunately, only a tiny fraction of the criminals who stole taxpayers’ money will be prosecuted.

While the pandemic unemployment insurance programs were temporary, improper payments in the federal government are both long-standing and rising.

First, no one ever spends other people’s money more carefully than they spend their own, and the same is true of the federal bureaucracy spending taxpayers’ money. And, second, the federal government has expanded so far beyond its original purpose—now spending four times as much transferring money from some people to others as it does on national defense and the justice system combined—that efficiency and accountability have fallen by the wayside.

Despite an array of legislation and regulatory directives that seek to hold federal programs accountable, improper payments continue to run rampant. For example, a former assistant director of forensic audits and investigative service at the Government Accountability Office, Linda Miller, explained in congressional testimony this year that federal programs are supposed to check the federal Do Not Pay database before issuing payments, but they ping the database and then issue the payments before receiving the results from the database.

And the sheer growth in federal spending and transfer payments—as opposed to core functions of government—has made it all the more difficult to protect the integrity of taxpayers’ dollars. In 2021, 4 of every 5 tax dollars the federal government collected, and 1 of every 2 dollars it spent, went to transfer payments.

Virtually all the $3.3 trillion in federal payments sent out in 2021—at a cost of $25,000 per household in America—were for things outside the traditional functions of the federal government.

My recent report, “As Administration Cracks Down on Taxpayers, Government’s Own Improper Payments Go Unchecked,” provides more than a dozen recommendations for policymakers to prevent improper payments and protect the integrity of taxpayers’ money.

The basic tenets of those recommendations, which include using part of the $80 billion in IRS funding to create a new Taxpayer Integrity Office within the Treasury, boil down to:

By applying better verification metrics, imposing accountability on program administrators, and limiting the number of government programs that Americans need to interact with, policymakers can limit what they need to take in taxes so that more Americans can decide—without bureaucratic approval—what they want to spend their money on and when they want to spend it.