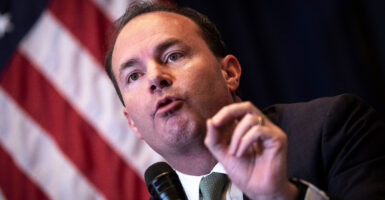 A former Republican senator writes that no current GOP lawmaker should vote for the radical Respect for Marriage Act unless and until the Senate first approves an amendment offered by Sen. Mike Lee, R-Utah—seen here on July 26—to ensure the protection of religious liberty. (Photo: Drew Angerer/Getty Images)

Sam Brownback, a former Republican governor of and U.S. senator from Kansas, is a former U.S. ambassador-at-large for international religious freedom.

Religious freedom is a fundamental right guaranteed by our Constitution and must be protected. Sadly, the same-sex marriage bill facing a Senate vote on Monday puts that freedom in danger for people of faith and religious schools, adoption agencies, and nonprofits.

Writing in the Deseret News recently, University of Virginia law professor Douglas Laycock attempts to argue that the badly misnamed Respect for Marriage Act is a “good compromise.”

Here’s the thing about our constitutional rights: It’s never acceptable to compromise, and that’s especially true for religious liberty.

Fortunately, there’s an alternative offered by Sen. Mike Lee, R-Utah, that provides faith-based institutions with protection from lawsuits and attacks from the IRS.

Lee’s amendment, known as the First Amendment Defense Act, should get a vote before the bill moves any further. Every senator should oppose cloture on final passage if the Lee amendment isn’t adopted, but especially the 12 Republicans who voted Nov. 16 on a procedural motion to debate the bill.

Proponents of the bill, including Laycock, minimize the implications for people and institutions that support traditional marriage between one man and one woman.

In reality, same-sex couples wouldn’t get any benefits or legal entitlements they don’t already have. Instead, the bill would put America closer to a point where people of faith, religious schools, and other nonprofits cannot fully live out their lives or activities in public.

That should frighten Americans, because it puts us at risk of not only losing fundamental freedoms, but also inches us closer toward a new state religious orthodoxy.

Backed by radical activists, the bill requires Americans to affirm certain ideologies under the threat of lawsuits and penalties.

If it were to become law, people of faith who view marriage as it’s been seen for thousands of years—the union between one man and one woman—would have a fed-sized target placed on their backs.

Our nation is blessed to have robust civil conversations and debates. We’re probably the most tolerant nation in the world.

If this bill becomes law, though, the federal government would create a national policy enforcing a particular view of marriage that threatens the tax-exempt status of faith-based organizations and groups.

This would weaponize the IRS in ways we haven’t seen, making the Obama administration’s targeting of the Little Sisters of the Poor look tame by comparison.

It will mean more litigation against religious schools and nonprofit groups, such as adoption agencies. And it will target Americans who only want to live out their sincerely held beliefs and moral convictions.

What this bill seeks to do, under the guise of protecting marriage, is take away the rights of people of faith. That’s why Lee’s efforts are so important. He has provided the only amendment that effectively addresses the very real threat to our religious liberty, and Laycock and Senate Republicans should rally around it.

For years, the radical Left told us that if we just “live and let live” when it came to same-sex marriage that everything would be OK. Now, the reply is “conform, or we’ll unleash the full force of the federal government on you.”

This bill isn’t a done deal yet. The Senate should reject the unsatisfactory “compromise” and adopt Lee’s amendment before final passage. All senators have a role to preserve religious freedom in our country.