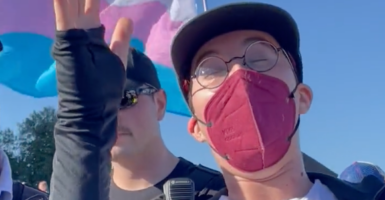 Combating cultural Marxism must begin on college campuses, because universities are the “source of the poison” of leftist ideology.

That was a major takeaway from a panel discussion, “How Cultural Marxism Threatens the United States—and How Americans Can Fight It,” last week at The Heritage Foundation. (The Daily Signal is the news outlet of Heritage.)

One of the panelists, Katharine Gorka, a former research fellow at Heritage, went so far as to urge parents to “stop sending your kids” to college to avoid the indoctrination.

The other panelist was Mike Gonzalez, a senior fellow for foreign-policy studies at Heritage. Gorka’s husband, Sebastian Gorka, host of the “America First” radio show and podcast, moderated the discussion, which included defining “cultural Marxism” and the influence of various intellectuals on the left.

Katharine Gorka and Gonzalez recently published a special report on the subject, analyzing how Marxism came to America and what strategies are most effective in curtailing its influence.

Gonzalez said that the Left is Marxist in nature and expanded on the type of Marxism the American Left has adopted in its rhetoric, which he says is an offshoot of older Marxist thought.

Antonio Gramsci was an Italian Marxist philosopher who adapted traditional Marxist ideology for developed countries. Katharine Gorka explained how his ideas were central to infecting Europe and America with Marxism, since the “proletariat revolution” did not catch on in the West as it did in Russia and other countries.

Gorka and Gonzalez’s special report details the actions of the Frankfurt School, which rose to prominence in Germany in the 1930s, then made its way to America when Herbert Marcuse, a Frankfurt School philosopher, became prominent in university circles for his writings in the 1960s at Harvard University. He said that Western capitalist democracies were irredeemably repressive and must be dismantled.

“Gramsci’s argument was ‘You can’t have a frontal assault,’ so you do it from the sides,” Katharine Gorka said. “[Marxists] said, ‘Let’s insinuate ourselves into the institutions and change the ideas, and win that way,’ which is exactly what they did.”

According to the special report, Gramsci argued that communists should abandon the dream of violent revolution, what he termed the “war of maneuver.” Rather, he argued, they should undertake a “war of position,” or hidden conflict. The supposedly oppressed groups would gain influence and power by taking over existing institutions. It would be the job of communist intellectuals to undermine the state’s “hegemonic narrative” and introduce into the minds of the people a “counternarrative.”

Gonzalez said that the subversion of institutions that cultural Marxists engage in is not a conspiratorial effort, but more a product of powerful people being students of Marxist-derived schools of thought.

“There is not a ‘plot’ in the sense that people go into basements in Cambridge, Massachusetts, or Berkeley, California, and hash out a plot and have secret meetings,” Gonzalez said. “But they are all reading the same things.”

Katharine Gorka mentioned the power of philanthropies in pushing cultural Marxism. She said they play a special role in advancing “diversity, equity, and inclusion” initiatives, which, according to the report, consist of “the university officials most involved with enforcing the cultural Marxist ideology.”

“I don’t think most Americans understand what a formidable foe we have in our major philanthropies,” she said. “The amount of money [philanthropies] are spending, the degree to which they are working together and coordinating, and the way they are throwing money into DEI [diversity, equity and inclusion] … . [W]e’re not just against this because it’s Marxism.”

She also said that colleges must be the “No. 1 priority” in combating cultural Marxism and agreed that universities are the “source of the poison” of leftism.

“There’s a whole slew of things that we’ve proposed [in the report],” Gorka said. “One of the ways this is getting funded is because of the whole system we have with funding research at universities … . [W]hen universities apply to the government for grants, they get a 50% overhead … . It’s what’s funding a lot of these DEI positions.”

The research funding that’s driving Marxist initiatives is extra “overhead” money from research grants, since the overhead money doesn’t have to be spent directly on a specific research project.