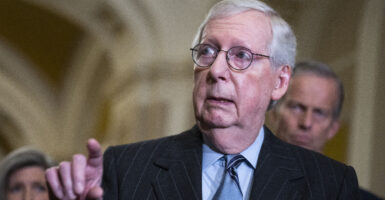 The Kentucky Republican defeated Scott 37-10, with one person voting present, The New York Times reported. The offices of Republican Texas Sen. Ted Cruz, Republican Wisconsin Sen. Ron Johnson, Republican Indiana Sen. Mike Braun, and Republican Missouri Sen. Josh Hawley confirmed to The Daily Signal on Wednesday that they were among the 10 who voted for Scott.

Republican Utah Sen. Mike Lee also confirmed to The Daily Signal that he voted for Scott, adding, “I also gave his seconding speech.”

Republican South Carolina Sen. Tim Scott’s office would not say how he voted.

Rick Scott, the first challenger McConnell had faced since he took on the role in 2007, had announced Tuesday that he would be running against McConnell for Senate Republican leader.

“I have the votes,” McConnell said in response to Scott’s announcement on Tuesday. “I will be elected.”

Top Republicans had also pushed for delaying the GOP leadership elections until after the December runoff in Georgia, in which Republican Herschel Walker is facing Democrat Sen. Raphael Warnock after neither won a majority on Election Day.

That vote to delay the elections failed 32-16 on Wednesday.

“I’m writing to you today because I believe it’s time for the Senate Republican Conference to be far more bold and resolute than we have been in the past,” wrote Scott, the chairman of the National Republican Senatorial Committee, in a letter to his colleagues.

“We must start saying what we are for, not just what we are against. I do not believe we can simply continue to say the Democrats are radical, which they are,” he continued. “Republican voters expect and deserve to know our plan to promote and advance conservative values.”

On Tuesday evening, The Daily Signal reached out to every Republican senator (except Scott and McConnell), asking them if they would support Scott for Senate Republican leader against McConnell.

In his letter to his GOP colleagues, Scott also said:

For those who want to get serious about ending reckless government spending and the devastating inflation it has caused, finally take action to protect Social Security and Medicare and preserve the promise of these programs for our children and grandchildren, hold government accountable from the FBI to the IRS, truly combat the extreme danger posed by Communist China and refocus our military on lethal defense instead of woke nonsense, I ask for your support in changing the direction of the Senate and rescuing America from the dangerous path Democrats have set it on.