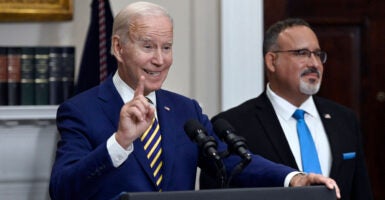 The latest news from the front is a victory, albeit a preliminary one, for the challengers. The 8th U.S. Circuit Court of Appeals entered an order Monday temporarily preventing the Biden administration from canceling any student debt.

The 8th Circuit currently is considering a lower court’s ruling that a coalition of six states led by Missouri lack standing to challenge student loan cancellation.

Under long-established legal rules, nobody can bring a lawsuit unless he first can show that he has standing (i.e., a concrete injury caused by debt cancellation and fixable by the courts).

Missouri argues that it has standing because it has a state agency, the Higher Education Loan Authority of the State of Missouri, that services student loans and stands to lose millions of dollars if the Biden administration cancels those loans.

The state also argues that it has standing because money that the Higher Education Loan Authority earns is invested in the state’s public colleges, and thus a reduction in its income will reduce the schools’ funding.

The 8th Circuit appears to agree that Missouri has standing. Based on the court’s order, the state’s interrelation with the Higher Education Loan Authority—whether statutory, financial, or both—is likely sufficient for Missouri to sue over the Biden administration’s plans for student loans.

The appeals court didn’t squarely address whether Biden has the authority he claims to cancel the debts of millions of student borrowers. But it acknowledged that “[w]hatever the eventual outcome of this case, it will affect the finances of millions of Americans with student loan debt as well as those Americans who pay taxes to finance the government and indeed everyone who is affected by such far-reaching fiscal decisions.”

This prompted the court to pause the impending debt cancellation and preserve the status quo while the plan’s ultimate legality is assessed. Although the case before the 8th Circuit involves only six states, the court’s order prevents the administration from forgiving loans nationwide.

So, where does this ruling fit in the broader fight over student debt cancellation? Before this decision, standing had been favorable ground for the Biden administration to defend. In a matter of weeks, it convinced the Supreme Court to turn aside two would-be challengers to the plan, both of whom lacked the concrete, particular injury needed to establish standing.

The states’ win on standing is procedural—it doesn’t resolve the legality of Biden’s plan, and the general pause on loan forgiveness will remain in place only until the 8th Circuit rules on the case before it.

Still, the win has significant implications beyond the temporary pause. Now that at least one state, Missouri, appears to have standing, the courts must answer the fundamental question: Does Biden have the power to cancel $400 billion in student debt without specific congressional authorization?

In fact, one lower court already has reached this question and answered it in the negative. A federal judge in Texas ruled Thursday that the HEROES Act, the 2003 statute on which Biden bases his action, doesn’t provide any authority to cancel student debt. The court, therefore, found the administration’s debt cancellation plan unlawful and vacated in its entirely.

If Biden’s actions have already been vacated by the federal court in Texas, what does the 8th Circuit’s decision add? In a word, security. The Texas decision charged headlong into the merits of the dispute, largely bypassing important skirmish lines like the standing question.

This left the ruling vulnerable on its flank, and the Biden administration, which immediately appealed the decision, is poised to turn that flank and have the decision overruled.

Missouri, by contrast, occupies stronger ground and is better positioned than any other current litigant to sustain its attack.

When standing is disposed of, the Biden administration will have less room for maneuver. Missouri and its compatriot states can then concentrate their fire where the administration’s defenses are weakest: the argument that a 20-year-old statute with no mention of debt cancellation authorizes Biden to erase the debt of 40 million borrowers.

A pitched battle on student loans looms. If Missouri prevails before the 8th Circuit, the campaign will likely shift eastward and be fought to a conclusion before the Supreme Court, with congressional antagonists looking idly on from across Capitol Hill.

Meanwhile, some 26 million borrowers have already applied for debt cancellation. With Congress locked in its habitual torpor, both borrowers and taxpayers must await the outcome of another round of “lawfare” in the federal courts.