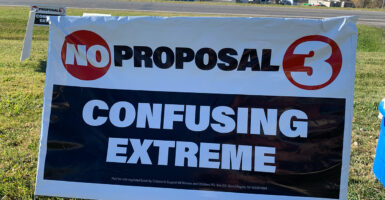 EAST LANSING, Michigan—Voters on Tuesday approved the pro-abortion Proposal 3, an amendment to the Michigan Constitution that will enshrine a “right” to kill unborn children.

With 52% of the vote counted, Proposal 3 had garnered the approval of 53.4% of voters and was rejected by 46.6%, according to election results posted by 12:40 a.m. Wednesday, Bridge Michigan reported.

“Today, the people of Michigan voted to restore the reproductive rights they’ve had for 50 years,” Reproductive Freedom for All campaign spokesperson Darci McConnell told Bridge Michigan after the group declared victory close to 1 a.m. Wednesday.

“Proposal 3’s passage marks an historic victory for abortion access in our state and in our country—and Michigan has paved the way for future efforts to restore the rights and protections of Roe v. Wade nationwide,” McConnell said.

But Amber Roseboom of Michigan Right to Life said Proposal 3 is the “most extreme proposal facing anyone in the country this November.”

The constitutional amendment will create an “unrestricted [and] unregulated right to abortion in the Michigan Constitution,” Roseboom told The Daily Signal at an election night watch party.  She said it also will “allow minors to take puberty-blocking and gender-transition therapies, and have abortions … all without parental consent.”

Michigan voters who backed the amendment said they believed it necessary to secure abortion access in their state.

Kristin Bellar, an attorney, told The Daily Signal that she voted yes on Proposal 3 because of her 6-year-old daughter.

“Sorry, it’s a little emotional to speak about,” said Bellar, 41, choking back tears. Freedom to get an abortion is part of Americans’ “fundamental rights,” she said, adding: “It’s difficult to talk about with your family and friends that don’t agree with you.”

In Michigan, abortion is permitted until an unborn baby is considered viable. The state’s 1931 law prohibiting abortion remains on the books, but a court blocked the law from going back into effect after the U.S. Supreme Court overturned Roe v. Wade in its decision in Dobbs v. Jackson Women’s Health Organization.

Michigan State University professor Brian Kalt said he is an independent politically and voted to back Proposal 3 even though he is “not exactly pro-choice 100%.”

“I do support some restrictions, but I wanted to restore the status quo before [the Dobbs decision] the best I could,” Kalt said, adding that he knowns Proposal 3 is “not exactly” restoring Roe.

The amendment to the Michigan Constitution reads in part:

Every individual has a fundamental right to reproductive freedom, which entails the right to make and effectuate decisions about all matters relating to pregnancy, including but not limited to prenatal care, childbirth, postpartum care, contraception, sterilization, abortion care, miscarriage management, and infertility care. An individual’s right to reproductive freedom shall not be denied, burdened, nor infringed upon unless justified by a compelling state interest achieved by the least restrictive means. Notwithstanding the above, the state may regulate the provision of abortion care after fetal viability, provided that in no circumstance shall the state prohibit an abortion that, in the professional judgment of an attending health care professional, is medically indicated to protect the life or physical or mental health of the pregnant individual.

Proposal 3 gained national attention after pro-life advocate Joan Jacobson was shot in her community of Lake Odessa, 40 miles east of Grand Rapids, while canvassing against the abortion amendment in September.

Jacobson is doing well and was at the polls Tuesday, telling The Daily Signal: “I decided to be here … in case there was somebody that was kind of like on the fence, wasn’t really sure. I could say this is what it’s going to do, and perhaps lead them to vote against it.”

Some opponents of Proposal 3 raised concerns over the amendment’s use of the word “sterilization,” fearing it could open the doors for minors to receive gender-transition surgeries, in which reproductive organs are removed, without parental consent.

“Proposition 3 may be a win for the radical abortion lobby, but it’s a loss for women, unborn babies, children, and parents,” Melanie Israel, a Heritage Foundation policy analyst, told The Daily Signal in an email. (The Daily Signal is Heritage’s multimedia news organization.)

Prop 3 enshrines abortion on-demand at any point in pregnancy in the state constitution. It goes beyond abortion, too. An ill-defined absolute right to ‘reproductive freedom’ could expand to include things like gender transition procedures, including for minors without their parent’s knowledge or consent.

The amendment contains a “lot hidden in the text … that voters, no matter their beliefs on abortion, don’t support: repealing parental consent, repealing health and safety standards that protect women, and even allowing non-doctors to perform abortions,” Christen Pollo, spokeswoman for Citizens to Support Michigan Women and Children, told The Daily Signal.

“I think it’s too vague, even for a constitutional amendment,” Lockman said. “The language is too broad, and I do feel like something needs to be done differently, I don’t want us to fall back on the 1931 law, but, like I told my wife, [the state] is going to have to get it right for me to vote for it.”

If Michigan’s pro-abortion coalition “wanted to draft something that would have simply restored Roe, or would have overturned the 1931 law, they could have done it and it would have been one to two sentences long,” Pollo said. “But instead, they wrote something that … does much more than they’re claiming it would.”

“Michiganders have lost their ability to have a say on critically important policy matters,” Heritage’s Israel said. “Prop 3 is a setback, but pro-life Americans will never shy away from the task of making abortion unthinkable.”