The Latest Election Myth Pushed by the Left 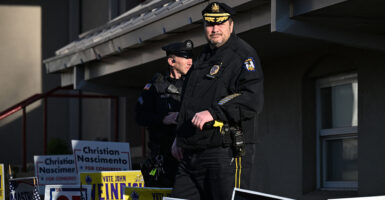 Liberals and federal agencies are now pushing the myth that there’s a persistent, rising tide of threats against election workers across the U.S. Pictured: Police provide security during the midterm elections at a polling station in Bryn Athyn, Pennsylvania, Nov. 8, 2022. (Photo: Ed Jones, AFP/Getty Images)

For years, liberal activists—with the assistance of their corporate media allies—have been pushing the myth that there is a wave of “voter suppression” going on across the country. As the record registration and turnout numbers in recent elections prove, as well as their numerous losses in litigation show, this is a false claim created by opponents of commonsense election reforms like voter ID.

Now, the latest myth they are pushing is that there is a rising tide of violent threats against election workers across the country that is “pervasive” and “unrelenting.”

President Joe Biden repeated that theme in his recent inflammatory speech at Union Station in Washington, D.C., as have federal agencies like the FBI and the Department of Homeland Security, which circulated a memo claiming there is a “heightened threat” of violence against “election workers.”

No one sanctions threats or violence against election officials, voters, poll watchers, or anyone else in the election process, and I say that as a former county election official in two different states. Such misbehavior is strictly prohibited by numerous state and federal criminal laws.

But is this claim really true, or is it an overblown assessment similar to the fraudulent claims made in 2016 that the Russian government had conspired with the Trump campaign to fix the election?

Well, let’s look at the numbers.

How many election officials are there in the United States? The U.S. Election Assistance Commission issued a comprehensive report on the 2020 presidential election listing a total of 132,556 polling places in the country and 775,101 election officials.

Because of this supposed “rising threat,” the Biden Justice Department formed an Election Threats Task Force in 2021 that included the Criminal Division, the Civil Rights Division, the National Security Division, the FBI, the Department of Homeland Security, and the U.S. Postal Service Inspection Service.

On Aug. 1, 2022, the Justice Department issued a press release on the findings of the task force, and its head, Assistant Attorney General of the Criminal Division Kenneth Polite Jr., testified before a Senate Judiciary Committee hearing on Aug. 3 entitled “Protecting Our Democracy’s Frontline Workers.”

According to Polite, the task force received over 1,000 complaints of “hostile” or “harassing” behavior. Of those, only 11% “met the threshold for a federal investigation.” In other words, only 1 in 10 of the complaints were substantial enough to warrant even opening an investigation.

After investigating these complaints, how many did the task force find serious enough to warrant prosecution? The answer is five. While Polite claims that “many” of the complaints they investigated were “hostile,” he admitted that “they did not include a threat of unlawful violence.”

In his testimony, Polite describes the elaborate lengths to which the Justice Department went in order to make sure the entire election community knew about this task force, so they would know who to notify if they were actually threatened or assaulted.

Yet the number of federal prosecutions for threats or actual violence against election officials after more than a year amounted to only five, a statistically insignificant number when compared to the three-quarters of a million election workers across the country.

Of course, even one such threat or attack is one too many against the citizens who serve our democratic republic by taking on the often difficult and thankless task of administering our election process. But is it a rising tide or a “pervasive” and “unrelenting” problem? The numbers don’t bear that out.

And you have to wonder: In the same way that too many members of local school boards complained that they were being “harassed” by “hostile” parents showing up at public meetings to raise important issues and asking tough questions about school curriculums and whether schools were miseducating and propagandizing their children, are election officials getting upset because the public is finally paying attention to how they are doing their jobs? And because they are asking questions?

These members of the public questioning their election officials are no more “domestic terrorists” than those parents questioning their school boards were, no matter how much Attorney General Merrick Garland and the Left try to label them as such.

Hopefully, no violence will occur in this important midterm election. If it does, then state and federal law enforcement will no doubt act, as they should. But a small number of isolated cases do not constitute a widespread, systemic problem that we need to be disproportionately concerned about. And no one should be fomenting that kind of myth that will unnecessarily scare both voters and election officials.