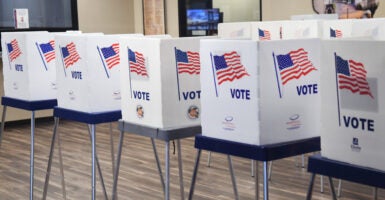 More than 400 elections ended in ties or were decided by a single vote in 2021 and 2022, according to the Public Interest Legal Foundation. The total includes elections in Wisconsin, Ohio, Pennsylvania, Iowa, and Maryland, which have contests for major offices that conclude Tuesday. Pictured: Voting booths are set up Oct. 24 at the Orange County Supervisor of Elections Office on the first day of early voting in Orlando, Florida. (Photo: Paul Hennessy/SOPA Images/LightRocket/Getty Images)

As voting is about to conclude Tuesday in the nation’s midterm elections, data shows that one vote can matter more often than Americans might suspect.

More than 400 elections ended in ties or were decided by a single vote in 2021 and 2022, according to a tally by the Public Interest Legal Foundation, an election watchdog group.

The total includes elections in the states of Wisconsin, Ohio, Pennsylvania, Iowa, and Maryland, all of which have contests for major offices that conclude Tuesday, according to the foundation’s findings.

“The media claims that voter fraud happens on such a small scale it could never impact who wins an election,” J. Christian Adams, president of the Public Interest Legal Foundation, said in a written statement. “This report proves that every single vote matters. We do not want an illegal ballot affecting the outcome of an election. Everyone needs to get out there and vote!”

Tied elections identified by the foundation were almost all for local government offices such as city council, school board, or county clerk. But some state legislative races also were in the mix, such as an Alabama Senate primary that ended in two candidates with a tie of 17,000 votes each and was decided by a lottery.

Other tied elections were for offices as small as precinct officers for the Republican and Democrat parties in Pennsylvania jurisdictions.

The Public Interest Legal Foundation found that election officials had to break six ties in Wisconsin using a coin toss, card draws, or lotteries in 2022. In Ohio, ties in 17 local races were broken with lotteries in 2021, according to the foundation’s research brief summarizing the findings.

“Sometimes, that one vote arrives (or is found) moments before the deadline to break a tie before candidates draw lots to determine their fates,” the brief says.

The report also notes earlier cases, including two Nevada precincts where Sen. Bernie Sanders, I-Vt., came up short during the 2020 and 2016 caucuses for Democrat presidential candidates.

The Public Interest Legal Foundation is building a database of all tied elections, or election results separated by a single vote.

For recent notable examples, the report cites seven local elections in Wisconsin that ended with a one-vote difference in 2022.

The foundation’s research brief says of these Wisconsin contests:

Varying games of chance determined outcomes in races for Kenosha County Supervisor, Sheboygan Common Council, Oneida County Board of Supervisors, Village of Port Edwards Council, Delafield Town Council, and the Village of Kronenwetter Board of Trustees. The Wauwatosa Common Council Seat 5 race ended in a one-vote difference with more than 10,000 ballots cast in the contest—the deciding vote came from a provisional ballot.

“To say that Democrat Jazmin Di Cola won a District 3 primary contest with a one-vote margin would be an oversimplification,” the report says, adding:

The initial primary result had to be decertified after official canvassers found more votes counted than legitimate ballots in custody. Officials determined that dozens of paper ballots were accidentally double-scanned. Another four uncounted provisional ballots were found in a folder. Three of those polling place provisionals ultimately blended with the count. The fourth was rejected because it was cast at the polls by a person who had already voted via mail ballot.

Regarding presidential politics, the Public Interest Legal Foundation’s brief summarizes two instances in which Sanders fell behind fellow candidates in Democrats’ presidential caucuses in Nevada—trailing Pete Buttigieg in 2020 in Reno and trailing Hillary Clinton in 2016 in Pahrump.

“Presidential hopefuls Pete Buttigieg and Bernie Sanders tied for a single precinct, setting a tiebreaker with a high-card draw,” the brief notes. “After the contested precinct captains agreed to make the ace the lowest card, Mayor Pete pulled a three to Bernie’s two.”

In 2016, the brief continues: “Presidential hopefuls Hillary Clinton and Bernie Sanders deadlocked in a precinct contest with 51 votes apiece. Hillary won the contest in an ace-high card draw between ace of clubs and six of hearts.”

New Jersey is the only state that doesn’t have a law for breaking a tie in election results, according to the legal foundation. The bulk of states, 28, require that ties be broken with some form of a lottery, while 13 states require a special runoff election between the deadlocked candidates. Idaho uses a coin toss and Texas lets candidates choose between a lottery or runoff.

“In multiple cases, first-tabulation ties were broken with a combination of recounts and late arriving/found ballots,” the brief says. “Provisional and overseas ballots have broken ties before tie-breaker statutes were followed.”