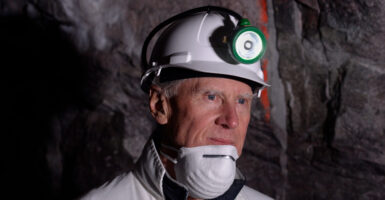 Trevor Blench, chairman of Steenkampskraal Holdings, is seen here underground at the SKK rare earth minerals mine on July 29, 2019, about 50 miles from Van Rhynsdorp, South Africa. SKK has been confirmed as having one of the highest-grade deposits of rare earth minerals in the world. (Photo: Rodger Bosch/AFP/Getty Images)

The U.S. is currently heading for a major national security train wreck.

Bewildering environmental policies, energy plans detached from reality, and an incomprehensible practice of trusting China to provide critical components for both civilian and military technologies is an unsustainable trajectory.

The administration has rejected fossil fuels, driving us commercially and across the defense industry toward electric vehicles. The problem is, China has a near-monopoly on the mining and refinement of rare earth minerals (such as lithium and cobalt) that are used in EV batteries. China also monopolizes the production of those same batteries.

In short, America is being forced to tie its future to EVs while having no capability to provide key elements of the system. Adding to the dilemma is that China is “allowed” to do all the “yucky stuff” we won’t do, or don’t want to do. The rub here is that China is not a client we can order about. It isn’t even our friend.

Today, China is taking advantage of current geopolitics to further entrench itself as the leading global producer of rare earth minerals. Critical minerals are already in short supply and heavily controlled by foreign powers. China dominates the global marketplace for rare earth metals through its control of both the production and processing. China produces three-quarters of all lithium-ion batteries in the world, with a single Chinese manufacturer, CATL, controlling 30% of the global EV battery market.

China doesn’t care a wit for the environment. The mess it has at home and its drive for control of these elements prove it.

The Biden administration knows of this problem, acknowledging critical minerals as an important issue to address in one of President Joe Biden’s earliest executive orders. That order specifically identified the need for the United States to have “resilient, diverse, and secure supply chains to ensure our economic prosperity and national security.”

Unfortunately, the opposite has occurred.

That same executive order led to a 100-day review report that specifically identified how important a reliable supply chain is for U.S. national security. The importance of lithium-ion batteries to military equipment and the need for rare earth metals used in airplanes and defense equipment was highlighted.

Beijing could and most likely will, when it’s advantageous, abuse its market power to reduce or even cut off the United States’ access to key critical minerals, leaving us without the ability to create next-generation battery technologies that are necessary for advanced military operations.

To establish a more reliable supply chain of critical minerals, the United States should consider working with multinational companies—not tied to China—based beyond our borders that already have access to the critical minerals we need to make electric vehicles.

Some of those multinational corporations, such as Glencore and Anglo American, already have global operations and are well-positioned to help meet the growing demand here in the United States.

Establishing a reliable supply chain of critical minerals and materials will help lessen America’s reliance on China and will lessen the national security risk faced today from Beijing’s market dominance.

The Biden administration’s extreme environmental policies, frankly, should be curbed. If we are stuck with them, we have to recognize their inherent contradictions and at least adjust them to reality.

China’s ability to hamstring American industry and defense must be mitigated. Action must be taken to alter this disastrous ambush in the making, and it must be taken now.