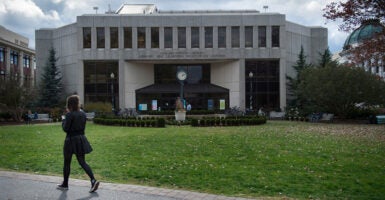 A student walks past the Bender Library on the American University campus in this file photo from November 2016. (Photo: Nikki Kahn/The Washington Post/Getty Images)

As I accepted an offer to enroll at American University in the spring of 2020, I knew what I was getting into.

With American University currently ranked by Niche, a large college-information aggregator and review platform, as the single most liberal university in the country, you’d think I’d be a fool for even considering going there.

One review on Niche cited “almost no diversity when it comes to political beliefs.” But I was set on taking my scholarship money and running with it.

In my very first semester, I quickly realized that the ranking was well deserved.

I found out, as a starry-eyed college freshman, that “American” University might not be so American, after all.

My first class, which was nothing special, took place over Zoom, since I entered college at the height of the COVID-19 hysteria. I was sitting in my small apartment, listening to my fellow classmates introduce themselves and our professor going through “housekeeping” information.

The first few classes went on like that, with the professor discussing various university resources and other miscellaneous information. Then things took a turn for the woke.

All freshmen at AU are required to take AUx1 and AUx2, and all other students must take them to graduate. As part of the AU core curriculum, they take center stage as one of the first college experiences a new student will have.

Both classes are a deluge of leftism.

The very first text the professor assigned us to read was “Rising up From Hatred.” It recounts the story of a white nationalist who turned away from the movement and lived to tell the tale. Seems innocent enough, informative even. What’s so bad about that?

The way his story was framed in class was the issue. Former President Donald Trump was equated with white nationalism many times in the book, as well as in class. When we discussed the book, questions were framed in a way that implied that the teachings of the class were unequivocally true, and we were simply being enlightened.

That was the pattern for every class I attended. We would presuppose that what our material was teaching was true, and we would discuss how true it was.

Each class amounted to a new sermon on leftist theology. The professor tasked us with consuming some form of leftist media and commenting on it. The list of suggested content contained works such as the documentary “Stay Woke: The Black Lives Matter Movement” and podcasts such as “Intersectionality Matters” and “The Diversity Gap Podcast: Unlearning Racism in a Community of Practice.”

Our professor also had us read the book “When They Call You a Terrorist: A Black Lives Matter Memoir,” written by Patrisse Khan-Cullors, a co-founder of Black Lives Matter. The book details how America is supposedly controlled by white privilege and racism, as viewed through the lens of the author’s own personal anecdote.

Each week, we would have a discussion about what we read. The majority of people would just rattle off diatribes about systemic racism or one of the many other buzzwords that have become so popular with the Left.

My problem with the content had nothing to do with learning about it per se, but with how it was presented as the “capital T” Truth, and how no one could challenge it. Since I needed a good grade, I held my tongue, lest I dare to speak out against the liberal orthodoxy and incur its wrath on my GPA.

That was until the very last class, when we were called upon to give some “constructive criticism” of the class.

I was glad to provide it. Of course, my classmates—who were more than willing to engage passively with course material, apparently because they believed it—did not take this well. The class was a breeze for them, since they intuitively knew the so-called answers.

Meanwhile, I was forced to find inventive ways of completing assignments that didn’t involve me outright lying about my political affiliations.

The fact that American University would require all its students to take these courses sequentially over two semesters and be graded on their adherence to leftist orthodoxy calls into question how “American” it really is.

There’s nothing American about forcing critical race theory and neo-Marxism down students’ throats. The university is simply undeserving of its own name. Even as a junior now, I still haven’t seen progress. I pray that it becomes worthy one day, but that day looks to be far away.