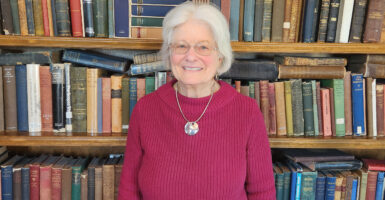 Pictured: Joan Jacobson, the pro-life woman shot while canvassing outside the home of the shooter. Photo courtesy of Joan Jacobson's attorney, David Kallaman.

A Michigan judge decided Wednesday that there is enough evidence to send to trial a man who shot an elderly pro-life woman who was canvassing against abortion at his home.

“It’s clear to me that Mr. [Richard] Harvey did fire a warning shot to send a message to Ms. [Joan] Jacobsen, and then he also shot her,” Judge Raymond Voet said, according to a local outlet. “Thankfully he didn’t kill or paralyze her considering how close it was to her spine. We’re lucky that no one was more seriously hurt.”

Authorities arraigned 74-year-old Richard Harvey on Sept. 30 and charged him with felonious assault (assault with a dangerous weapon), carless discharge of a weapon causing injury and reckless use of a firearm, Michigan State Police said.

His next hearing date is set for Nov. 8, according to a local Michigan outlet. It is not immediately clear whether Harvey was politically motivated when he shot 84-year-old Joan Jacobson. Critics have pointed out that he described Jacobson to a 911 dispatcher as a “right-wing nut.”

Michigan’s Democratic Governor Gretchen Whitmer, who has promised to “fight like hell” to protect abortion in her state, has not weighed in on Harvey’s shooting of Jacobson and did not immediately respond to a request for comment.

“Now is the time to use every tool in our toolbox to protect women and reproductive healthcare,” she tweeted after the overturn of Roe v. Wade, adding on another occasion, “Abortion is still legal in Michigan, and I’ll never stop fighting to keep it that way.”

Though Whitmer remains silent, Michigan’s Secretary of State Jocelyn Bensen defended protesting outside the Supreme Court justices’ homes in late May after the leak of a draft Supreme Court opinion indicating that Roe v. Wade would be overturned (the protests outside the justice’s homes are ongoing).

Whitmer directly avoided condemning a June attack on a Michigan pro-life center during a news hit where the host referenced the attack on Jackson Right to Life and asked Whitmer: “How concerned are you about violence? What are you seeing on the ground?”

At least 86 Catholic churches and 74 pregnancy resource centers and pro-life organizations have been attacked since May, according to Catholic Vote trackers.

Speaking to The Daily Signal on Friday, Whitmer’s opponent Tudor Dixon bashed the governor for her silence on the Jacobson shooting.

“What will it take for Gretchen Whitmer to admit that her and Joe Biden’s increasingly violent rhetoric is putting lives and livelihoods in danger?” Dixon asked. “Our conservative supporters have increasingly come under attack from the radical Left and yet, Gretchen continues to stay silent on it all. I hope justice is served.”

Jacobson previously told The Daily Signal that she went to Sharon and Richard Harvey’s home on September 20 to urge them not to vote for a local pro-abortion ballot proposal.

Jacobson insisted that Harvey refused to listen to her, yelled over her, and finally ordered her off the property. The 120-pound woman, who stands at 5 feet tall, said that Harvey followed her down the porch, onto the sidewalk, continuing to yell at her, before her husband Richard Harvey appeared in the yard carrying a .22-caliber rifle.

Jacobson said that the couple didn’t say anything to her, and she headed back to her car and tried to assess whether or not she could drive.

“I didn’t feel lightheaded or like I was going to pass out or anything. I thought, ‘I gotta get out of here.’ I got into the car and they were standing by the sidewalk, I looked through the car window, and I had a thought that went through my mind, I thought, ‘This guy is going to shoot me again through the window of the car!’ He didn’t, and I was able to get the car started, get into gear, get on the road.”

The 84-year-old woman said she drove to a nearby police station. The next thing she knew, she said, she was whisked away in an ambulance to a Grand Rapids hospital. Both Jacobson and her attorney expressed shock to The Daily Signal that the Harveys did not express concern or offer assistance to the wounded woman—though Sharon Harvey was reportedly holding her cellphone in her hand and had threatened to call authorities earlier in the altercation.

The couple disputes Jacobson’s claims. Harvey said that when he observed his wife and Jacobson loudly arguing, he shot Jacobson accidentally after firing a warning shot into a pine tree in his front yard.

Jacobson told The Daily Signal that she was not waving her clipboard at all or attempting to hit Sharon Harvey. She also said she was not yelling and screaming. Her attorney also questioned why Harvey would fire a warning shot.