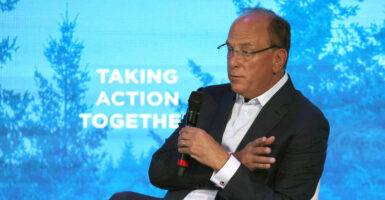 Missouri State Treasurer Scott Fitzpatrick announced on Tuesday that the state’s pension fund is selling all of its assets that are managed by BlackRock, a move that will divest up to $500 million from the asset manager.

The Missouri State Employees’ Retirement System is withdrawing its assets from BlackRock’s control because the state believes that the company is using its control of pension funds to push a “left-wing” agenda, as opposed to making money for its clients, according to a press release.

Missouri joins several other Republican-run states that have also pulled funds from BlackRock for similar reasons.

“We should not allow asset managers such as BlackRock, who have demonstrated that they will prioritize advancing a woke political agenda above the financial interests of their customers, to continue speaking on behalf of the state of Missouri,” Fitzpatrick said in the press release. “It is past time that all investors recognize the massive fiduciary breach that is taking place before our eyes, and do something about it.”

Republican state treasurers in Louisiana, South Carolina, Arkansas, and Utah will divest a total of $1 billion from BlackRock by the end of 2022, according to The Financial Times. The removal of state money from BlackRock’s management comes after 19 Republican attorneys general accused BlackRock of boycotting the fossil fuel industry at the expense of its clients, according to a letter sent to BlackRock CEO Larry Fink.

BlackRock, which manages roughly $8.5 trillion worth of assets, denied such allegations and claimed that it has “hundreds of billions of dollars” invested in energy companies, according to a response letter the company sent. The company also stated that it was fully considering the interests of its investors in relation to its climate-focused investment agenda, as 90% of global governments are committed to phasing out fossil fuels by 2050.

BlackRock is committed to achieving net-zero emissions by no later than 2050, according to its website.

“Fiduciary duty must remain the top priority for investment managers—a duty some of them have abdicated in favor of forcing a left-wing social and political agenda that has failed to succeed legislatively, on publicly traded companies,” Fitzpatrick said.

Large asset managers such as BlackRock, Vanguard, and State Street are pushing private companies to adopt environmental, social and corporate governance standards. Republicans have previously claimed that those standards seek to force businesses to promote climate activism as well as diversity, equity and inclusion policies.

BlackRock did not immediately respond to the Daily Caller News Foundation’s request for comment.