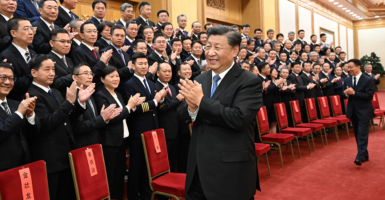 A Republican congressman is warning that the Chinese Communist Party could weaponize the data of U.S. poll workers found on servers in mainland China after the chief executive of an election software company with alleged ties to the party was arrested.

“Having servers ultimately controlled by the Chinese Communist Party with personal data about our poll workers is very concerning,” Rep. Ralph Norman, R-S.C., told The Daily Signal. “It’s possible China is simply warehousing this data for the time being, reserving the option to exploit it at a later date.”

It’s also possible that China is now actively using this data to explore which poll workers might be targets for blackmail, election interference, or other nefarious purposes. Regardless of China’s motives, this is something that deserves a full investigation.

Despite his calls for investigations, Norman does not believe any meaningful progress will take place with Democrats in control.

“I don’t expect any meaningful investigations as long as Democrats are in control of Congress,” Norman said. “With Republicans retaking the majority in January, however, I do expect there to be a wide variety of investigations on numerous fronts, including this one.”

“On something as important as election integrity, I hope Congress can come together in a bipartisan manner,” he added.

Los Angeles County District Attorney George Gascón revealed on Oct. 4 that Eugene Yu, who is the founder and executive of the election software company Konnech Inc., was arrested in Michigan “as part of an investigation into the possible theft of personal identifying information of those [poll] workers.”

Los Angeles County hired the Michigan-based company for $2.9 million over five years, charging Konnech with securely maintaining the data and only allowing U.S. citizens and permanent residents access to it.

Los Angeles District Attorney investigators, however, discovered that poll workers’ information was in fact stored on servers in China despite the contract.

Helen Raleigh, the author of “Confucius Never Said,” told The Daily Signal in an email that poll worker data could be used for “intelligence gathering for future political influence campaigns” and “gathering information for key individuals for future blackmailing.”

“This may be the tip of the iceberg. The Chinese government probably has more information about Americans than we realize,” Raleigh, a senior fellow at The Federalist, said.

Rep. Mark Green, R-Tenn., said he and his colleagues on the China Task Force are working to counter China’s “malign influence” to protect both U.S. elections and national security.

“China has made strides in their technological infrastructure and has attempted to compromise our national security. It’s obvious why the Chinese Communist Party wants the personal information of American poll workers,” Green told The Daily Signal in an email.

“They want to influence American elections and push our nation toward their version of totalitarianism,” he added.

Rep. Jim Banks, R-Ind., echoed the calls for an investigation. Like Norman, however, he did not express optimism about any substantial progress regarding election security under Democrat leadership.

“President [Donald] Trump’s [Director of National Intelligence] John Ratcliffe concluded that China intended to interfere in the 2020 election, and Eugene Yu’s ties to the Communist Party should be immediately investigated,” Banks, the chairman of the Republican Study Committee, told The Daily Signal in an emailed statement.

“Unfortunately, election security has become a partisan issue and I think we’ll have to wait till Republicans win back the House for the sort of election integrity measure outlined in Leader [Kevin] McCarthy’s Commitment to America,” Banks added.

A Konnech spokesman denied the allegations in a statement provided to The New York Times and labeled Yu’s arrest “wrongful.” Yu immigrated from China to the U.S. in 1986 and is an American citizen, Newsweek reported.

“Any L.A. County poll worker data that Konnech may have possessed was provided to it by L.A. County and therefore could not have been ‘stolen’ as suggested,” the spokesman said.

Victoria Coates, a senior research fellow in international affairs and national security in The Heritage Foundation’s Margaret Thatcher Center for Freedom, slammed the People’s Republic of China as a “ravenous consumer of data on all issues they consider sensitive for the U.S.” (The Daily Signal is the media outlet of The Heritage Foundation.)

“They regularly attempt to harvest dossiers on groups they think they might exploit in the future—in this case to potentially meddle in U.S. elections,” Coates said.

Konnech did not respond to The Daily Signal’s comment request.