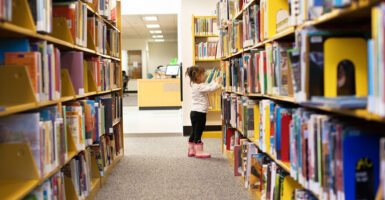 Public schools “can't retaliate against parents for expressing genuine concern about their own children's education,” mom Lindsey Barr says after being fired for saying a library book wasn’t right for her two sons. (Photo: ipekata/Getty Images)

Lindsey Barr was fired from her substitute teaching job after expressing concern over the content of a book in the school library.

Barr is a mother of three boys. All her children attend public school in Bryan County, Georgia, about 30 miles southwest of Savannah, where she also works as a substitute teacher.

In August, Barr learned that McAllister Elementary School, where her first- and third-grade sons attend and where she sometimes works, planned to have the book “All Are Welcome” read during a “read aloud” story time in the school library.

“I actually thought that the theme of the book was great, kindness, … including everyone,” Barr, 37, told The Daily Signal during a phone interview Thursday, “but the images, the illustrations, are contrary to what we believe for traditional marriage and families.”

The book’s colorful pictures include depictions of same-sex couples taking their children to school and two lesbian mothers, one of whom is pregnant.

“I want to be able to instill [in my own children] what I think is biblically correct for marriage and family. And [the book] was against those beliefs,” said Barr, who previously worked as a full-time teacher for a decade in Bryan County public schools.

On Aug. 16, Barr spoke with her 6-year-old son’s teacher and asked that he not be a part of the story time where the book was to be read. The teacher said that was not a problem.

Later that day, Barr emailed Heather Tucker, principal of McAllister Elementary School, and asked to talk with her. The two had a phone call the following day, and Barr expressed her concerns over the pictures in the book.

Barr says she explained to the principal that she and her husband would like to be the ones having conversations with their kids about issues such as same-sex marriage, rather than the school. The mother says she was clear that she wasn’t asking for the book to be removed from the school, only that her children not be exposed to the content.

The principal agreed that her sons didn’t need to participate in the story time, Barr recalled.

The call ended and Barr said she felt like everything “was fine.”

Not long after the conversation, Barr said, she tried to log into the online portal the school uses for substitute teachers to pick up more work. She could not do so. She emailed the principal, asking whether she had been removed as a substitute teacher, but did not hear back.

“The next thing that I heard from the school was from the human resources director asking me to come in for a face-to-face meeting in regard to my role as a substitute teacher,” Barr told The Daily Signal.

Barr met Aug. 23 with the principal, Tucker, and Debi McNeal, director of human resources for the school district.

“I’m gonna start by just saying some of the comments that I’m gonna say are difficult, they’re gonna be difficult to hear, they’re difficult for me to say,” Tucker told Barr at the beginning of the meeting, according to a transcript.

The principal went on to explain to Barr why she was no longer allowed to be a substitute teacher in the school district:

So last week you accused McAllister [Elementary] of pushing a propaganda campaign … with liberal extreme worldviews. That’s inaccurate. That is not something that we’re doing. However, every educator that walks into this building, regardless of personal views, they have to drop their biases at the door. It just has to be done. We have to be willing to support every child that comes into this building.

Tucker said she was concerned about Barr’s bias “against same-sex couples,” according to the transcript.

“It is very real that we could have a student that identifies as gay, or that has parents that identify as gay,” the principal said, “and I have concerns on how you would be able to support that student since those biases are still entering into the workplace as well.”

Barr responded that she brought her concerns to the principal as a mother, not as an employee of the school district.

“I wasn’t sharing a bias with you. That isn’t a personal bias. I said, ‘As a Christian mother of children, young children, I don’t think that we should be pushing same-sex marriage on my children,’” Barr told Tucker.

The two told Barr that she no longer would be allowed to be a  substitute teacher in the Bryan County school district.

Philip Sechler, senior counsel with Alliance Defending Freedom, a Christian legal aid organization, sent a letter Sept. 13 to Trey Robertson, assistant superintendent of teaching and learning at the Bryan County Board of Education.

In the letter, Sechler demanded that the school system “immediately reinstate Mrs. Barr so she can resume working as a substitute teacher at McAllister [Elementary], and that it refrain from any future retaliation against Mrs. Barr for her protected speech.”

Sechler asked for a response from Robertson or the school district by 5 p.m. Sept. 16, explaining that if Barr was not reinstated, she would be “forced to pursue other legal options to vindicate her rights.”

Neither Robertson nor any other Bryan County school district official responded, Sechler says.

Attorneys with Alliance Defending Freedom filed a lawsuit Sept. 30 against McAllister Elementary School and Bryan County Schools with the U.S. District Court for the Southern District of Georgia, Savannah Division.

The Daily Signal sought comment from Robertson, Tucker, and Schools Superintendent Paul Brooksher, but did not receive a response.

“Parents shouldn’t be bullied and intimidated by public schools who don’t want to hear their views,” Sechler told The Daily Signal. “Lindsey [Barr] expressed concerns to protect her own children and they fired her … and that’s wrong.”

Barr said she is taking a stand to protect her constitutional right to free speech.

Public schools, she said, “can’t retaliate against parents for expressing genuine concern about their own children’s education.”