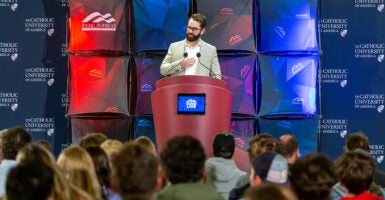 Daily Wire commentator Matt Walsh spoke to a full house about his documentary film “What Is a Woman?” on Tuesday at the Catholic University of America. (Photo: David Keith/Young America’s Foundation)

Despite efforts by a leftist group to prevent it from taking place, conservative commentator Matt Walsh, producer of a documentary film questioning the legitimacy of transgenderism, spoke Tuesday at the Catholic University of America.

Nearly 750 people attended the event in Washington to hear Walsh discuss his controversial new documentary “What Is a Woman?” One leader of the hosting group told The Daily Signal it had the highest turnout of any political event in the school’s history.

“In the film, I talked to a therapist who was ready to affirm me as a woman because I confessed to enjoying scented candles,” Walsh said at the event, hosted by the university’s Young America’s Foundation chapter.

He told his audience that, while making the film, he was most surprised to learn how pervasive gender ideology really is. He found that was the most common observation among his audience as well.

The basic tenets of gender ideology … that gender is fluid, that people can decide for themselves whether they’re men or women, that transgenderism is a valid and healthy state of being, which should be affirmed and encouraged, that sex is not binary, that there are dozens, if not … an infinite number of valid identities outside of man and woman … . All of these beliefs, however, half-baked and incoherent they may be, can be found everywhere in the country.

He recalled interviewing an administrator at a school where students identified as cats, and teachers affirmed them as cats. Walsh also interviewed a man who identifies as a wolf—and also as a woman.

Another thing Walsh said he learned was the confusion regarding biological sex that he encountered really seemed to be an affectation driven by fear.

One woman he interviewed seemed to be genuinely confused, Walsh said. She was so committed to a relativist view that when he asked her, “What would happen if it was my truth that she no longer exists?” she looked him straight in the eye and said: “Well, then, I don’t exist.”

“I knew that women were being erased in our culture. I didn’t realize that some of them were so eager to erase themselves,” Walsh said.

Often people would give vague and evasive answers to the question, “What is a woman?” said Walsh. “They’re afraid to speak basic biological truths.”

“Gender ideology paves the way for itself with intimidation, threats, coercion,” he explained. “Fear is a big part of the story.”

But, Walsh said, that’s nothing new. “The roots of modern gender ideology could be traced all the way back to the 19th century—arguably even earlier than that,” he explained. Gender ideology as we know it today really began to take shape in the mid-20th century, Walsh noted, “thanks to the work of two hideous and evil crackpot degenerates named Alfred Kinsey and John Money.”

Kinsey and Money, 20th-century psychologists and pedophile activists, pioneered the medical castration of children through gender-reassignment surgeries and hormone treatment.

“I learned that the ultimate goal of the gender ideology agenda goes far beyond gender,” Walsh said. “The ultimate goal is to undermine, destroy, and erase truth itself.”

The final thing I learned from spending a year staring into this abyss is that we can win this fight … . Gender ideology is insane, destructive, pervasive, ubiquitous. I believe [it’s] the greatest evil that the world has ever seen. It’s also beatable.

“We can win because the other side can be crushed under the weight of simple questions,” he added. “The experts crumpled and collapsed and panicked in front of me.”

Noting those on the Left who have accused him and others of advocating violence and terrorism, Walsh responded: “The only thing we’re coming armed with is a spine and questions.”

Attendees asked Walsh questions following his remarks. Stacy Langton, one attendee, commented that she was the mother who exposed what she considers pornographic material in the libraries at her children’s school in Fairfax, Virginia. Even before she asked her question, the audience gave her a standing ovation.

That’s the problem with the “gender-affirming” model, he said, contending that therapists are affirming the feelings of kids who hate themselves and hate their bodies, in effect saying, “You really should hate yourself.”

“It’s abominable. It really is,” Walsh remarked. “I would advocate an approach of true self-acceptance.”

Catholic University’s new president, Peter Kilpatrick, shared in a Tuesday email to the student body that one group of students asked him to cancel or censor Walsh’s event. The group, which Kilpatrick did not identify, claimed Walsh’s appearance would make its members feel unwelcome and unsafe.

“The argument made an impression on me because it came from a sincere desire, which I share, to create on this campus an inclusive and welcoming atmosphere for all students,” Kilpatrick wrote.

The president said he could not agree to the group’s request, however, while adding he did “not want any student to feel unwelcome or unsafe.”

A week before the event, Catholic University’s Progressive Student Union released a statement, which it posted on its public Instagram account. The progressive students group claimed Young America’s Foundation is “contributing to a campus culture which promotes division over unity, discrimination over inclusivity, and fear over hope.”

A Progressive Student Union spokesperson told The Daily Signal in an email that the group has nothing further to say following the event. “We are focusing our energies on supporting workers at the Catholic University of America and building a better, more unified campus, for all people,” the spokesperson wrote.

The LGBTQ student group CUAllies, which remains unsanctioned by the university, also sent an email to its members urging them not to attend the Walsh event.

The email, shared by Young America’s Foundation member Nick Baker, stated: “We want to let you know that this is happening and that you SHOULD NOT go to the event.” CUAllies board members explained they were concerned about “the rhetoric that Matt Walsh spreads, and the message that the university is sending by allowing him to come to campus.”

You can watch the livestream of the Young America’s Foundation event here: https://www.youtube.com/watch?v=4J-5dL0fl5s.