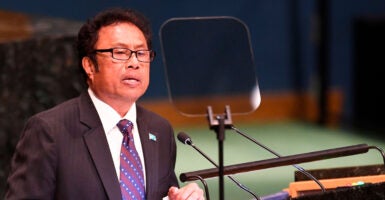 Congress has a decision to make soon that will affect the nation’s ability to deter China and maintain the U.S. role in the Pacific.

Without meaningful action to renew U.S. agreements with several Pacific Island nations, China will be positioned to gain greater leverage and influence across what was once an American lake.

A year from now on Sept. 30, 2023, provisions within bilateral compact agreements binding the Republic of Palau, the Republic of Marshall Islands, and the Federated States of Micronesia to the U.S. begin to expire.

Negotiations are finally underway to establish a plan for continued economic support. Once those are completed, Congress will vote on legislation containing proposed amendments to those long-held agreements that confer significant benefit to all parties.

The islands together are known as “freely associated states” because of the agreements, called Compacts of Free Association with the U.S. It’s those compacts that afford the U.S. low-cost access to strategically important locations in return for limited economic assistance and security assurances.

Currently, the U.S. enjoys a presence in the Marshall Islands with its Ronald Reagan Ballistic Missile Defense Test Site.

In Palau, the U.S. will soon build a new radar system. In 2019, then-Palauan President Thomas Remengesau Jr. stated, “Palau’s request to the U.S. military remains simple: Build joint-use facilities, then come and use them regularly.”

The Department of Defense is also interested in the Federated States of Micronesia, as it hopes to base U.S. Air Force Agile Combat Employment operations there.

It isn’t just a mercantile arrangement, however. The islanders are also patriots. For example, as of this year, Palau enlistments into the U.S. military—a feature of the compact agreement—are higher per capita than any state in America.

But it’s the veto afforded America by these compact agreements over other nations’ military access to the islands that’s most significant in the competition with China.

But that comes with responsibility.

Failure to secure renewed compact agreements amid dwindling U.S. economic assistance could push these long-standing American allies into China’s arms. And China has proven adept at taking advantage of such opportunities.

When Kiribati (an island in the central Pacific) became unsatisfied that it would take years for America to finance the refurbishment of a World War II-era runway, it turned to China. If used for military purposes, this airstrip could support an enhanced Chinese military presence in the middle of American logistic lines and greatly complicate military operations.

China’s leaders deny that this is a military project, but the world has heard that line before. Many in the region remember China’s false promises regarding the militarization of reefs in the South China Sea.

Make no mistake: China is clearly prioritizing the Pacific. Most recently, China’s foreign minister visited several Pacific Island countries presenting them with a “Common Development Vision” and “Five-Year Action Plan on Common Development.” Included were proposals for “cooperation in the fields of traditional and non-traditional security” and “cooperation on network governance and cybersecurity.”

While thus far Pacific Island countries are rejecting those ideas, will that continue in the future?

China is making it harder for Pacific islanders to resist. Its Belt and Road Initiative is one way it’s luring islanders with easy money. But easy money has strings attached, and the variety of infrastructure and development projects dangled to host countries by China has been called “debt diplomacy.”

Easy development money enabled a controversial Chinese security pact with the Solomon Islands, which in 2019 received about $730 million from China after switching diplomatic recognition from Taiwan to China.

Such investment is significant for the 724,000 Solomon Islands residents, assuming it actually reaches them. According to the World Bank at the time, it was equivalent to half of the Solomon Islands’ real gross domestic product.

Regionally, from 2009 to 2019, China was the second-largest lender in the Pacific behind the Asian Development Bank. What happens when China surpasses the bank’s $1.42 billion in regional assistance?

Without military access to these islands, the U.S. loses strategic positioning currently achieved at a low cost, hobbling its ability to sustain military operations in the western Pacific. At a time when China’s military aggression toward Taiwan is ramping up and pressures to attack are growing, it’s clear the freely associated states are increasingly a focus of a new great power game in the Pacific.

The answer depends on how Congress responds to the renewals, which should prioritize U.S. security interests while honoring a decadeslong relationship with these islands.