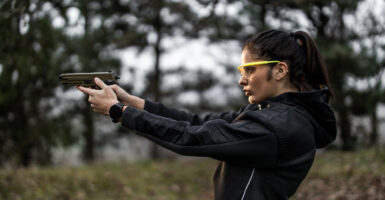 The Second Amendment is about the natural right of self-defense, ensuring that individuals and communities have the practical means to forcibly resist those who would infringe on their other inalienable rights. (Photo illustration: Jecapix/Getty Images)

President Joe Biden’s most recent speech on gun control showed, once again, that he has little respect for gun owners or the Second Amendment. Consider, for example, where Biden mocked (and not for the first time) gun owners as being afraid of “deer in Kevlar vests” simply because they want to defend themselves and their families with the same guns that law enforcement officers use to protect the president and his family.

It was just one unserious moment among many in a completely unserious speech in which Biden also reminded gun owners that they should just comply with gun control because, after all, he could just carpet-bomb them into submission.

Unfortunately, the president never will be able to talk seriously about the Second Amendment until he understands one fundamental reality about the right to keep and bear arms—it is not about hunting or sport shooting.

It’s about the natural right of self-defense, ensuring that individuals and communities have the practical means to forcibly resist those who would infringe on their other inalienable rights—whether that infringement comes from a criminal, tyrannical government, or an invading army.

The examples below represent only a fraction of the news stories on defensive gun use that we found in August. You may explore more by using The Heritage Foundation’s interactive Defensive Gun Use Database. (The Daily Signal is Heritage’s multimedia news organization.)

As these examples show, the main priority of most lawful gun owners isn’t to score an eight-point buck or become an Olympic marksman. It’s to ensure that if someone should threaten them, their livelihoods, or those around them, God forbid, these gun owners are capable of adequately defending themselves.

It’s time for the president to retire his old trope about “deer in Kevlar vests” and show himself much more willing to treat the Second Amendment—and those Americans who exercise the rights protected under it—with significantly more respect.

inion about this article? To sound off, please email letters@DailySignal.com and we’ll consider publishing your edited remarks in our regular “We Hear You” feature. Remember to include the url or headline of the article plus your name and town and/or state.