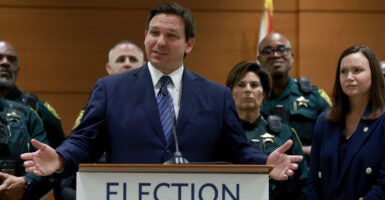 In using already-appropriated government funds to fly 48 illegal alien Venezuelan migrants from San Antonio, Texas, to the tony blue enclave of Martha’s Vineyard, Massachusetts, DeSantis has once again demonstrated his mastery of the political game.

For at least the second time this year, with the first being his bringing The Walt Disney Co. to heel when that company badly erred and picked an unwinnable fight over gender ideology, DeSantis has highlighted for all his sound judgment, shrewd political instincts, and ability to frame the national political narrative to his liking.

The situation at America’s southern border is nigh catastrophic. As of earlier this week, in fiscal year 2022, the Border Patrol has encountered more than 2.4 million illegal aliens. That is substantially higher than the previous record, set—you guessed it—just last fiscal year, when the Border Patrol encountered a little under 2 million illegal aliens. Fiscal year 2022, incidentally, isn’t even over.

Prominent border towns such as Del Rio, Texas; Eagle Pass, Texas; and Yuma, Arizona have been completely besieged by the murderous, transnational criminal cartels that now de facto control the U.S.-Mexico border. Those cartels are taking advantage of the Biden administration’s gross negligence, flooding the border with unvetted migrants and the de facto chemical warfare that is (usually Chinese-manufactured) fentanyl.

In countless border towns across the four states sharing a land border with Mexico, crime is now rampant, migrant facilities are overfilled to the point of inhumaneness, and basic social services, such as hospitals and medical facilities, are completely overtaxed.

Nor, while the problem is most acute in states such as Texas and Arizona, is the issue narrowly confined to border states. Due to the Biden administration’s reckless resuscitation of Obama-era “catch and release” policies, countless masses of illegal aliens crossing the border and pleading invariably bogus “refugee” or “asylum” status are also being shipped to the nation’s interior. They will purportedly one day stand before our overloaded immigration courts to formally press their claims, but in reality they will usually just escape into the shadows, never to be heard from again.

Amid this horrific status quo, and Biden’s gross dereliction of his solemn duty to secure the border, what exactly is the sane half of America that actually wants a secure border supposed to do?

Beseeching the administration to stanch the bleeding has simply not worked, so hard-headed action is needed. Such a state-level urge to secure itself against unwanted intruders is entirely justified, both morally and constitutionally; as the late Supreme Court Justice Antonin Scalia reminded us in the 2012 case of Arizona v. U.S., “the power to exclude from the sovereign’s territory people who have no right to be there” is the “defining characteristic of sovereignty.”

The idea was simple: Make these sanctimonious elites, who are incentivizing a genuine humanitarian disaster with their open-borders policies and obtuse rhetoric, feel at least a modicum of border states’ day-to-day pain. But Abbott’s efforts, however warranted, didn’t seem to have a huge effect on the national discourse.

The Florida governor’s move, for which he is risibly already being investigated and sued, has successfully shone a massive spotlight on America’s immigration mess. It has dominated headlines for a full week now, garnering mass plaudits from those on the right and performative shrieks of hysteria from those on the open-borders left.

By choosing Martha’s Vineyard, the iconic liberal elitist bastion and summer home of former President Barack Obama, the Republican governor stuck a dagger deep into the heart of the American liberal psyche. Better yet, he highlighted the unbearable hypocrisy and “NIMBY”-ism of liberal elites—those contemptible yuppies who would publicly clamor for unfettered migration while privately bewailing the fact that their resort town must now bear the burden of a mere 48 aliens.

Indeed, the migrants remained on the Vineyard for less than 36 hours; they were quickly deported to the Massachusetts mainland, assisted by 125 National Guardsmen. That’s more than 2.5 guardsmen per illegal. Turns out unvetted illegal immigration is a big problem, after all.

DeSantis thus forced a national conversation on the unsustainable, egregious situation at America’s southern border. And in so doing, he cleverly guided the conversation to political turf that redounds, in the lead-up to the pivotal 2022 midterm elections, to Republicans’ benefit.

As Axios reported Thursday morning: “Stories about the busing and flying of migrants to other parts of the country captured significant social media attention over the past week.” The outlet continued: “Interactions on stories about DeSantis flying migrants to Martha’s Vineyard far outnumbered those on the stories about abortion or the FBI raid at Mar-a-Lago during that same time period, for example.”

Considering that there is some evidence that abortion is hurting Republicans in certain swing states—a problem greatly exacerbated by Republicans’ own perpetual fumbling of the issue—this is a welcome political development. Public polling routinely show voters trust Republicans more than Democrats on immigration and border security. And who can blame them?

Formally, Ron DeSantis may be the governor of just one of America’s 50 states, but over the past two years he has also emerged as the singular focal point and symbolic leader of red-state America. As DeSantis has again reminded us, his instincts for picking smart and culturally salient fights, on winning and meaningful issues, is unrivaled in American politics today.

Those of us who live in Florida are deeply fortunate to have him as our leader. Would that the rest of America one day gets to experience it, too.