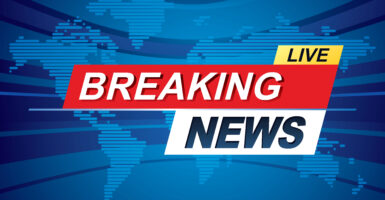 A politically motivated killing was news in North Dakota, where it happened early Sunday, but you'd never know it if you relied on most major broadcast and cable TV news programs. (Photo: Anson/iStock/Getty Images)

Shannon Brandt, 41, struck and killed the teenager with his Ford Explorer SUV early Sunday in an alley. His mother said Ellingson called and asked her if she knew Brandt (she did). The boy called again a short time later and said that “‘he’ or ‘they’ were chasing him.” The mother could no longer reach him after that.

Court documents said, “Brandt admitted to striking the pedestrian with his car because he had a political argument with the pedestrian and believed the pedestrian was calling people “to come get him.” He claimed the teen was part of an unspecified Republican “extremist group.”

Brandt was released on bond.

While the Fox News Channel and Newsmax both started reporting this story on Tuesday evening, Newsbusters found zero coverage on ABC, CBS, NBC, CNN, or MSNBC. How about our taxpayer-funded PBS and NPR? Zero coverage. The New York Times and The Washington Post had nothing.

The Associated Press did a brief story, but it left out the partisan/ideological details, that Brandt said Ellingson was a Republican “extremist.” It cited the highway patrol saying a political argument as motive is still unsubstantiated. They don’t want this in the “political violence” category, where it becomes fodder for national debate.

This killing bears some resemblance to 32-year-old Heather Heyer dying when she was run over by a white nationalist during dueling protests in Charlottesville, Virginia, in 2017. In that case, 35 other people were injured.

The liberals would insist this was different because it occurred at a major protest scene over the removal of Confederate statues that the national media had been anticipating for weeks in advance.

Heyer’s death was promoted as a political disaster for then-President Donald Trump. “PBS NewsHour” ran headlines like “Trump faces backlash for Charlottesville comments as protest victim is laid to rest.” Joe Biden later declared that Trump’s reaction to the Charlottesville attack inspired him to run for president.

Comedian and actor Michael Ian Black tweeted, “Metaphorically speaking, yesterday the President stood in the middle of 5th Ave and shot somebody. Her name was Heather Heyer.”

Liberal outlets recently rolled out a new set of stories marking the fifth anniversary of Heyer’s death. Doesn’t Ellingson’s death deserve national attention? Or is it just too contrary to the narrative that all the political violence is presumed to be coming from the conservative side?

No one’s going to suggest this is a problem for Biden, who recently trashed MAGA Republicans as a dangerous threat to democracy.

This lines up with the recent slaying of Las Vegas Review-Journal reporter Jeff German by Democratic county official Robert Telles. Since the victim was a journalist, this has gotten some national attention, but it came with a nasty tendency to avoid describing Telles as a Democrat.

It makes it harder to speculate that Democratic politicians are spurring violence through using hateful rhetoric if media outlets seek to squelch the idea there’s any politically motivated violence by Democrats.