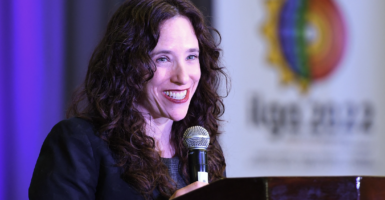 Republican lawmakers are accusing the State Department of “radical gender imperialism” and of seeking to push other nations to “normalize and encourage transgenderism among youth.”

In a letter first obtained by The Daily Signal, members of the Republican Study Committee point to a leaked memo reportedly circulated by Secretary of State Antony Blinken indicating that the Biden administration may begin pushing other countries to endorse youthful “gender affirming care”—a euphemism used by the media, activists, and Democrats to describe the more grisly-sounding transgender surgeries, hormones, and puberty blockers.

“First and foremost, normalizing and encouraging transgenderism among children has no place in American society, especially when it is done by the federal government,” the Republicans warned in the letter, sent Monday. “Children in America and abroad shouldn’t be exploited to advance a radical agenda.”

Rep. Jim Banks, R-Ind., led his colleagues in sending the letter to Jessica Stern, the U.S. special envoy to advance the human rights of lesbian, gay, bisexual, transgender, queer and intersex persons. Stern did not immediately respond to a request for comment from The Daily Signal.

“These sorts of surgeries have no mental or physical benefits; in fact, the suicide rate post-surgery for transgenders is about 20 times higher than average,” Banks told The Daily Signal on Tuesday. “But according to the Biden administration, providing therapy instead of performing irreversible surgery on patients with gender dysphoria is a violation of their human rights.”

“The Biden State Department has now flown a pride flag outside the Vatican, funded atheism, appointed a special representative on [critical race theory], and promoted insane gender ideology,” he added. “They have seriously damaged our standing in the world to promote a far-left ideology that most Americans reject.”

In the letter, the lawmakers highlighted that the State Department memo reportedly defines conversion therapy as all efforts to “suppress or change an individual’s … gender identity.”

“This definition implies that counseling minors against gender transition is akin to electrically shocking minors to ‘cure’ same-sex attraction,” the letter said. “It also condemns all potential treatments for youth suffering from gender dysphoria aside from the two most extreme and irreversible options: transition surgery and hormone therapy.”

The letter continues: “This ignores the fact there is no strong empirical evidence to support the idea that gender transition surgery helps patients lead happier, better, healthier, or more fulfilled lives. However, there are many reports of transgender individuals feeling physiologically damaged post-transition.”

The lawmakers describe the memo as “a form of radical gender imperialism that threatens our relationships with other nations and harms our standing in the world,” warning that “the first consequence of this policy is to undermine our allies’ regard for the United States’ moral authority on human rights issues.”

Such strict U.S. measures would ostracize countries that have banned “gender affirming care” or transgender surgeries, hormones, and puberty blockers for minors, the lawmakers said.

“Many countries in Europe, including the United Kingdom, Finland, and Sweden, employ either ‘last line of defense’ policies on ‘gender affirming care,’ or have banned gender surgeries for youth altogether,” the letter noted. “These more restrictive policies now risk making Western European nations ‘human rights abusers’ in the eyes of the State Department, putting them on similar footing as the People’s Republic of China (PRC), which has committed genocide of the Uyghurs, or the Maduro regime, which has utilized arbitrary detentions and torture against regime dissidents in Venezuela.”

The Republican Study Committee promised that it is committed to “providing oversight of this radical proposal,” emphasizing that “unlike parts of America and Western Europe, transgenderism does not enjoy government support.”

“How will the Biden administration punish countries that allow nonsurgical and nonhormonal treatment of youth gender dysphoria?” the letter asks. “By what metric(s) will the State Department deem the Stern initiative successful? Will economic and cultural cooperation between the U.S. and other nations be made contingent on these countries demonstrating that a sufficient number of youth every year have ‘transitioned’?”