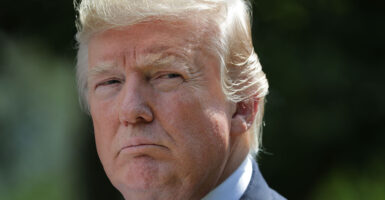 The United States House of Representatives passed legislation Thursday that would prevent future presidents from imposing an initiative of former President Donald Trump—and thereby preserving and entrenching “bureaucracy,” according to one Republican lawmaker.

Introduced by Rep. Gerry Connolly, D-Va., the Preventing a Patronage System Act would eliminate a category of Schedule F employees that Trump created through an October 2020 executive order.

Though President Joe Biden rescinded that category when he was elected, Trump has reportedly indicated he would reimpose it if elected president. But Thursday’s legislation would require the former president, or any other future president, to obtain consent from Congress before moving federal government positions in the competitive service to outside the merit system principles.

Democrats claim that reimposing Schedule F would cause federal employees to lose protections, “including due process rights, which prevent them from being easily fired when a new administration takes office.”

“My colleagues on the other side of the aisle want to preserve and entrench bureaucracy to step over the will of the people so that this town can decide the well-being of the American people,” Roy said. “That’s what it’s about. It’s about power. It’s about the entrenchment of power among bureaucrats. My colleagues know it, and that’s why they’re trying to advance this legislation.”

“Let’s be 100% clear,” the Texas congressman added. “This is about leftists in this body wanting to protect the entrenched leftists in the bureaucracy undermining the will of the American people every single day. That’s what it’s about. We don’t want to allow the people who are running the agencies to go in and fire people who are either not doing their job, completely violating their ethics at the desk, or frankly, are going right against the law or the will of the American people.”

Democrats have framed the effort as an attempt to keep unsuitable employees from rising to positions they do not merit. In a statement on Thursday after the vote, Connolly said that “expertise, not fealty, must define our civil service.”

“The civil servants who make up our federal workforce are the engine that keep our federal government running,” said the Virginia Democrat, who first introduced the legislation with Rep. Brian Fitzpatrick, R-Pa., in January 2021 after Trump created Schedule F.

“The former president’s attempt to remove qualified experts and replace them with political loyalists threatened our national security and our government’s ability to function the way the American people expect it to,” he added.