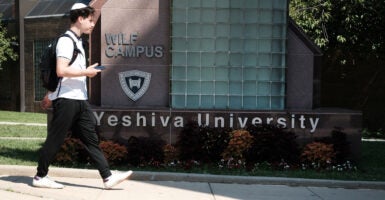 A young Jewish man walks by the campus of Yeshiva University in New York City on Aug. 30. The university is fighting in court efforts to force it to recognize an LGBTQ+ student group, claiming, “Yeshiva cannot comply with that order because doing so would violate its sincere religious beliefs about how to form its undergraduate students in Torah values." (Photo: Spencer Platt/ Getty Images)

Another conflict is brewing between the constitutional right to freely exercise religion and the civil right to be free from discrimination.

Like several such cases in recent years, the Supreme Court is likely—or so we hope—to decide this one favorably in the end.

Yeshiva denied the application of the YU Pride Alliance, a group opposed to and hoping to change Yeshiva’s teaching on this issue, for recognition as an official student group. The alliance sued in state court, claiming that Yeshiva’s decision violated New York City’s Human Rights Law prohibiting discrimination on the basis of sexual orientation and gender identity.

There’s the conflict. Cases like this, especially when they start in a state court, must follow a particular process before arriving at a final resolution of the merits of the legal issue.

Yeshiva asked that the trial court’s order requiring Yeshiva to grant the Pride Alliance full recognition be put on hold while the case is being appealed. Qualifying for such a “stay pending appeal” required Yeshiva to make a strong case that it would likely win on the merits and suffer “irreparable harm” in the meantime if the stay wasn’t granted.

Not surprisingly, the trial court refused to put its own decision on hold, and the two levels of New York appellate courts agreed without even a word of explanation.

Yeshiva then took that request for a “stay pending appeal” to the U.S. Supreme Court, which has its own process. Justice Sonia Sotomayor, who handles procedural requests within the 2nd Circuit, which includes New York, granted a stay on Sept. 9 and referred the matter to the full Supreme Court for consideration on what to do next.

While a cursory glance makes this procedural decision look like a body blow to religious freedom, it’s not. Here’s why. First, this was not a decision on the merits of whether Yeshiva’s right to exercise religion must give way to the alliance’s right to be free from discrimination.

It was only a decision on whether, on the way to reaching such a decision on the merits, the trial court’s decision should temporarily be put on hold.

Second, the majority denied a stay because Yeshiva had not pursued all of its options in state court, not because Yeshiva would likely fail on the merits or would not suffer irreparable harm.

In fact, the majority repeatedly said that if Yeshiva strikes out completely in state court, it “may return to this court” and renew its request for a stay. What’s more, Sotomayor—author of a few scathing dissents from cases in the past term where religious liberty was victorious—was within her authority to unilaterally deny Yeshiva’s emergency petition for consideration, but chose instead to allow the full bench to weigh in on what to do next.

The four dissenters—Justices Samuel Alito, Clarence Thomas, Neil Gorsuch, and Amy Coney Barrett—thought that there was “no good reason” to make Yeshiva jump through these state court hoops. They would be, Alito wrote for the group, the four votes needed to accept a case for review, and “Yeshiva would likely win if its case came before us.”

They considered it more important, therefore, to avoid the irreparable harm Yeshiva would suffer by skipping a useless trip back to state court.

While that might look like exalting form over substance, however, process is important. The alliance asked the state courts to decide whether Yeshiva had violated a local human rights law. It is entirely reasonable to argue that those courts should finish their job before the case jumps to federal courts.

If Yeshiva does return, the Supreme Court is likely to grant a stay, and the dissenters took the opportunity to begin making that case, perhaps hoping the lower state courts who will now consider this matter will take a hint.

They argued that requiring official recognition of a student group that advocates “an interpretation of the Torah with which the University disagrees” would, in effect, force Yeshiva to contradict itself on a matter of religious teaching.

If the First Amendment means anything, Alito wrote, “it prohibits a State from enforcing its own preferred interpretation of Holy Scripture.” This would be “a shocking development that calls out for review.”

In addition, “a vast category of secular groups” are exempt from the New York City Human Rights Law, being treated “more favorably than religious schools like Yeshiva.”

The Supreme Court has repeatedly held that the First Amendment protects religious institutions’ decisions about who may further their religious mission and “the ability of religious schools to educate in accordance with their faith.” Even as recently as last term, in a case similarly addressing the intersection between religion, education, and the government, the court clarified that the Constitution does not permit—let alone require—the government to discriminate against religion.

The conflict involving Yeshiva fits squarely within that line of cases, and its ultimate outcome will likely strengthen religious freedom, even if it takes a little longer to get there.