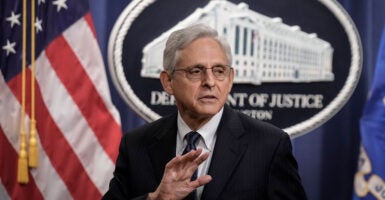 The Justice Department has refused to release its mandated strategic plan about ways to champion voter registration and participation, according to the Foundation for Government Accountability.

President Joe Biden’s March 2021 Executive Order on Promoting Access to Voting required every federal agency head to submit a plan within 200 days outlining methods the agency could use to promote voter registration and participation.

A federal district court decided earlier in summer 2022 that the Justice Department must release documents on this matter to the Foundation for Government Accountability by Sept. 8, but the department withheld the plan, citing executive privilege, and revealed heavily redacted versions of other documents, the Foundation for Government Accountability revealed.

Foundation for Government Accountability President and CEO Tarren Bragdon said Americans “deserve to know if the Biden administration’s unprecedented action is fair and nonpartisan.” He argued the Justice Department must reveal the documents to ensure fair elections.

“Why are they ignoring public record requests for strategic plans on federal voter registration efforts?” Bragdon asked. “Why are they treating these documents like they are classified information dealing with nuclear weapons? Midterms are approaching, and the DOJ’s failure to disclose information raises troubling issues.”

Biden signed the executive order while Republican legislators in Georgia and other states championed election reform measures that CNN deemed “voter suppression legislation.” The order was “limited in scope,” according to USA Today.

Democrats have failed to pass the For the People Act and the Freedom to Vote Act through the Senate, bills that would increase federal power related to elections.

The Justice Department did not immediately respond to the Daily Caller News Foundation’s request for comment.