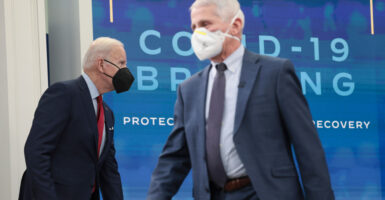 In April, Dr. Anthony Fauci, President Joe Biden's chief medical adviser, said that the country was “out of the [COVID-19] pandemic phase.” Yet, just a couple of months later, Biden extended the emergency declaration again. Pictured: Fauci, right, walks across the stage as Biden arrives for a meeting of the White House COVID-19 Response Team on Jan. 4 in Washington, D.C. (Photo: Win McNamee/Getty Images)

Is COVID-19 still an emergency? If you want a straight answer, don’t ask President Joe Biden.

His answer changes as it suits his political agenda.

COVID-19 infections and deaths are low, vaccination rates are high, and treatments are widely available. In other words, we’re in a much different place than we were in March 2020, when then-President Donald Trump declared a national emergency.

And yet, Biden just relied on Trump’s declaration to gain access to special emergency powers that, Biden claims, allow him to shift up to $519 billion in student loan debt to taxpayers. For reference, that’s a bigger number than the gross domestic product of all but 13 states.

It’s a flimsy legal argument, but nobody would accuse Biden of caring too much about the law.

Some people would, however, argue that he cares very much about the COVID-19 pandemic. Surely, he cares more about getting the pandemic response right than exploiting it for political gain. If so, his constant flip-flopping on the pandemic is not helping that narrative.

For example, in early 2021, the Centers for Disease Control and Prevention released a number of studies about COVID-19 finding that it was safe for schools to fully reopen. Biden immediately quashed the CDC’s recommendation and issued new guidance, prepared in large part by a teachers union, that kept schools locked down.

By the Fourth of July of 2021, Biden celebrated America’s “independence” from the pandemic and proclaimed victory over it. Just a month later, however, he announced a new eviction moratorium on the grounds that it was needed to deal with what the CDC described as “high disease rates” during “this really tenuous, challenging period of time.”

A few months later, Biden was singing a different tune as he tried to end Title 42, a policy that allows border agents to expel illegal immigrants to reduce the spread of COVID-19. His administration said that improved conditions made it “no longer necessary.”

A month later, he relied on that extended emergency declaration to claim for himself the power to forgive student loans.

Maybe Biden really cares about the nation’s COVID-19 response. Maybe he’s really trying to balance restrictions against the need for family members to be together, students to be in school, and businesses to be open. If so, he seems to have much worse information than the rest of us.

COVID-19 conditions have not changed as haphazardly as Biden’s policies have. If he’s operating in good faith, then he isn’t operating smartly.

But maybe he isn’t operating in good faith. Maybe he’s just following the Democratic strategy of never letting a useful crisis go to waste. There is, after all, a curious overlap between his shifting position on COVID-19 and his political agenda at the time.

In any case, what we can say for sure is that if you want to know whether there’s still a real COVID-19 emergency, the last person you should ask is Biden.