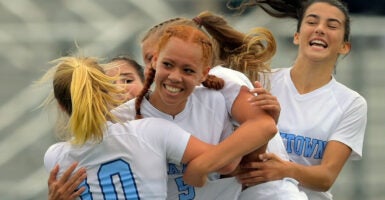 Title IX rules will impact whether men who identify as women will be allowed to play in female sports. Pictured: Yorktown players celebrate with Aminata Davis, 3rd from left, after she kick the only goal of the game during Yorktowns defeat of Kellam 1-0 for the Virginia girls soccer class 6 state championship at Freedom High School in Aldie, VA on June 11, 2022.. (Photo: John McDonnell/The Washington Post via Getty Images)

As the clock ticks down on the public comment period for the Department of Education’s proposed rule change to Title IX, inconsistencies have emerged on the total number of comments already submitted.

Politico reported Tuesday that the Regulations.gov website tracking the total number of publicly submitted comments had logged over 349,000 comments.

But by Friday, three days later, the total number of public comments had shot down to 184,009—a decrease of more than 160,000 comments.

The Biden administration provided no explanation to The Daily Signal of why those comments were removed. Politico later reported a “clerical error” had led to the disparity in numbers.

Additionally, a disconnect exists between two sources of data on submitted comments: Regulations.gov and the Office of the Federal Register.

The proposed rule change for Title IX, the federal law that prohibits discrimination because of sex in federally funded schools and universities, would redefine the word “sex” to include sexual orientation and gender identity.

Opponents of the change argue that it would end protections for girls and women by allowing men who identify as women to use women’s restrooms and locker rooms and to compete on women’s sports teams.

Regulations.gov, by contrast, is a curated and moderated list, meaning duplicate or spam comments are weeded out. By its very nature, the number of comments on Regulations.gov should be lower than the number logged on the Federal Register.

Agencies such as the Department of Education are permitted to redact certain comments if they contain private information or inappropriate language, or are likely part of a mass-mail campaign.

However, a knowledgeable observer says that so many missing comments is abnormal.

The jaw-dropping disparity in the Federal Register’s number of total comments received on the proposed Title IX rule from one day to the next, without explanation or disclaimer, should raise alarm bells for American parents whose children at federally funded schools will receive the direct impact of any finalized rule.

Whether the sudden loss of nearly 200,000 citizen comments stems from incompetence or obfuscation, the Department of Education has some explaining to do.

The Daily Signal, which is Heritage’s multimedia news organization, sought comment on the missing material from the Office of the Federal Register.

Staff attorney Miriam Vincent replied, saying: “The Office of the Federal Register does not collect, maintain, or track comments on documents that we publish on behalf of other agencies.”

Instead, Vincent said, the Federal Register uses an automated program that takes data from Regulations.gov and uploads it to the site directly. The Register has “no control over that number and does not know how it’s calculated,” she said.

Vincent added: “Only the issuing agency can answer questions related to a specific docket or published document.”

The Daily Signal also sought comment from both the Department of Education and Regulations.gov, but did not receive responses.

However, in an updated version of the Politico newsletter, the outlet reported the Department of Education claimed that a “clerical error” with one comment that boosted the count by more than 200,000.

Perry is skeptical that’s what happened.

“The Department of Education’s claim that the error in the number of comments is due to a clerical error doesn’t pass the smell test,” said Perry. “Far more likely is that they don’t want the American people to know how unpopular this policy change is.”

Individuals and organizations wishing to provide comment have until Sept. 12 to do so.