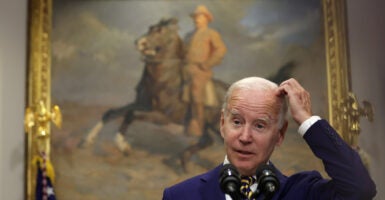 President Joe Biden's amnesty for student loan debt—estimated to cost $519 billion—is just one component of this boondoggle. Here are four other expensive and regressive changes in the plan, which Biden is pictured announcing Aug. 24 at the White House. (Photo: Alex Wong/Getty Images)

With every passing day, the scope of the Biden administration’s regressive, expensive, unfair, and potentially illegal amnesty for student loan debt becomes clearer.

Some 43 million borrowers will be eligible for the loan cancellation, courtesy of the millions of Americans who did not, or could not, attend college.

Individuals earning up to $125,000 (or $250,000 for couples) are eligible to have their student loan debt transferred to American taxpayers.

The Biden administration estimates this move will eliminate the entirety of student loan balances for 20 million borrowers. That’s because one-third of borrowers owe less than $10,000 and half owe less than $20,000.

The debt amnesty—estimated to cost $519 billion—is just one component of Biden’s boondoggle. Here are four other lesser known, though equally expensive and regressive, changes:

In addition to up to $20,000 in debt amnesty, the Biden administration has extended the repayment moratorium until Dec. 31, adding another $16 billion to the price tag.

This pause on repayments not only has allowed individuals to forego making any payments since March 2020, but stops any interest from accruing at the same time. As a result, each month federal taxpayers are losing $5 billion in accrued interest that will not be recouped, and have lost $155 billion since the pause first took effect.

Biden’s moratorium extension is particularly regressive. The Committee for a Responsible Federal Budget, an organization comprised of past agency heads and budget experts, found that holders of law degrees received an estimated $29,500 as a result of the pause on interest accrual; holders of medical degrees an average total benefit of $48,500.

Incredibly, if you were one of the prudent borrowers making payments on your loan during the pause, you now can get a refund of those payments, bumping your balance back up to what it was in March 2020, and increasing the amount of forgiveness you receive.

Besides the loan cancellation and the extended payment pause, the plan includes major changes to existing income-driven repayment plans, which are available to income-eligible borrowers.

These changes would cut payments in half and reduce the time to full cancellation by half (from 20 years to 10 years for those with loan balances under $12,000). The changes would cap monthly loan payments at 5% of discretionary income, down from 10%, and increase the amount of income that is considered nondiscretionary.

The plan also would prevent borrowers earning less than 225% of the federal poverty line from having to make any payments whatsoever—up from $150% of the poverty line. (The current poverty line is an income of $27,750 for a family of four.)

3. Provides ‘Bonus’ of Not Being Considered Taxable Income

As The Wall Street Journalreports, Sens. Elizabeth Warren, D-Mass., and Bob Menendez, D-N.J., snuck a provision into the American Rescue Plan, passed in March 2021, that made any future student loan forgiveness tax free until Jan. 1, 2026.

“The senators’ press release at the time boasted that this ‘paves the way’ for President Biden to forgive up to $50,000 in debt. And so it did,” the Journal’s editorial board writes.

This change could add another $34 billion to the price tag.

“There is more outstanding student debt in Washington than in any other city in the country,” Philip Wegmann reported in RealClearPolitics.

The American Accountability Foundation found that the 41-person political staff overseeing the student loan program at the Department of Education owe between $2.8 million and $6.5 million in outstanding student loan debt. Another 30 senior White House staffers who were required to file a financial disclosure form owe as much as $4.7 million in student loan debt.

The Penn Wharton Budget Model now has the total cost of the move (inclusive of debt amnesty, the pause on repayments, and a much more generous income-based repayment plan) exceeding $1 trillion.

The typical college graduate owes relatively little and, as a result of having attended college, has the ability to repay her loan. As the American Institute for Economic Research economist William Luther points out, the typical holder of a bachelor’s degree graduates with approximately $25,000 in student loan debt, but will earn $35,000 more every year compared to her counterpart with a high school diploma.

This debt amnesty “redistributes wealth to those who are already doing better than most,” Luther writes, adding:

It offers debt relief to individuals making as much as $125,000 and households making as much as $250,000! Individuals making $125,000 in America are at the 89th percentile. Households making $250,000 are at the 93rd percentile. They are among the richest people in one of the richest countries in the world. They are not struggling. They do not need assistance.

Although some individuals do borrow more, high debt largely is reserved for graduate students, who make up 56% of student loan debt holders. Although some undergraduate borrowers struggle to repay their loans, existing income-driven repayment plans are already in place.

The bottom line is that the Biden administration has put into motion a plan that will further inflate college costs, hinder economic growth, reward upper-income earners, and provide a major handout to woke institutions of higher education.

America’s children will be picking up the tab for this fiscal negligence for a generation.