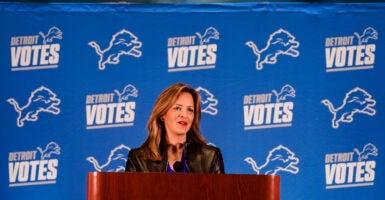 Michigan Secretary of State Jocelyn Benson—seen here at a Nov. 3, 2020, press conference as election workers prepared to secure ballots at Ford Field in Detroit, home of the NFL's Detroit Lions—is inexplicably resisting efforts to require her to purge the names of the dead from Michigan's voter rolls. (Photo: Kent Nishimura/Los Angeles Times/Getty Images)

In an order that illustrates the bizarre views of controversial Michigan Secretary of State Jocelyn Benson, a federal court has turned down Benson’s motion to throw out a lawsuit filed against her for refusing to remove almost 26,000 dead voters from Michigan voters rolls.

In mid-September 2020, the Public Interest Legal Foundation (of which I am a board member) sent Benson a list of all of the deceased registrants who remained on the state’s voter rolls less than two months before the presidential election.

That shows just how inadequate Michigan’s procedures are for safeguarding the accuracy of its voter list.

The Public Interest Legal Foundation had conducted a very detailed matching program to ensure the list it provided to Benson was accurate. As federal Judge Jane Beckering, an appointee of President Joe Biden, pointed out in her order, the legal foundation had compared the names of registered voters with the Social Security Administration’s Death Index and “matched full names, full dates of birth, Social Security Numbers, and credit address history information.”

Yet Benson refused to take any action to verify this information and to remove those dead voters from the rolls. She was obligated to do so under Section 8 of the National Voter Registration Act, which according to Beckering, requires election officials to remove “registrants from the voter registration roll because of the death of the registrant or a change in the residence of the registrant.”

The law also requires transparency. Election officials must make available for public inspection and copying all records “concerning the implementation” of its voter registration activities and, in particular, its procedures for maintaining the accuracy of the lists, such as removing deceased voters.

Yet when the Public Interest Legal Foundation  requested that Benson allow “public inspection or provide copies” of its records regarding the removal of dead voters, she responded that no such inspection would be allowed and no copies would be provided because her “offices were closed to the public due to the pandemic.”

According to the judge, the legal foundation sent multiple letters to Benson trying to get those records before it finally was forced to file suit because Benson not only refused to comply with the law, but also refused to take any action to use the detailed information provided by the foundation to clean up the state’s voter rolls.

Instead of simply settling the lawsuit and agreeing to finally remove the dead voters, Benson filed a motion to dismiss the case, while her spokeswoman called the lawsuit an attempt to “undermine American democracy.”

Apparently, Michigan’s secretary of state thinks that trying to prevent someone from using a deceased voter’s registration to fraudulently vote “undermines” democracy.

Nothing could be further from the truth, of course. The voter registration list is an essential election integrity document because it tells election officials who is eligible to vote. Accurate voter rolls reduce the opportunity for fraud and give voters confidence in the honesty of their elections.

In her motion to dismiss, Benson made the meritless claim that the Public Interest Legal Foundation had not fulfilled the notice requirement of the National Voter Registration Act, which requires that election officials be given written notice of a potential violation of the law prior to a lawsuit being filed.

Given the numerous letters that legal foundation had sent to Benson, which included a detailed list of the dead voters as well as a complete description of the methodology used to create the list, the court refused to dismiss the lawsuit.

The judge held that the legal foundation had more than satisfied the notice requirement since it had not only “set forth the manner in which Secretary Benson has purportedly failed to comply with the NVRA’s list maintenance requirements,” but also “clearly communicated that it would commence litigation if the purported violation was not timely addressed.”

In fact, the National Voter Registration Act requires notice 90 days before you are allowed to file suit. The legal foundation had waited 411 days, giving Benson more than enough time to act. But instead of trying to fix the problem, Benson failed to do anything about it and continues to spend taxpayer dollars and resources on fighting the lawsuit and defending the state’s inadequate list-maintenance program.

Of course, this isn’t the end of the case. But it is an initial win for election integrity in Michigan since the case will go forward, and Benson will have to defend her refusal to comply with federal law.

It should be alarming to Michigan residents that their secretary of state is fighting to prevent the removal of deceased individuals who are still registered to vote. Maintaining accurate, clean voter rolls is an important part of her job, and election officials should not have to be sued to force them to fulfill such a basic job requirement.

Hopefully, this lawsuit will be successful in finally getting Benson to remove the nearly 26,000 deceased registrants who shouldn’t be on Michigan’s voter rolls.

In 2021, a similar lawsuit was filed by the Public Interest Legal Foundation in Pennsylvania and ultimately the commonwealth agreed to settle the case and remove the deceased registrants from its voter rolls.  But as in Michigan, organizations like the legal foundation should not have to file a lawsuit to get a state to do what it should have been doing all along.

Michigan is a battleground state that often has very close elections. In 2016, Donald Trump won the state by a little more than 11,000 votes. Local elections in Michigan are often decided by a handful of votes.

We should all be able to agree that we do not want deceased individuals on the voter rolls, providing the opportunity for someone to cast illegal ballots in their name.

That should not be a partisan issue. One illegal vote is too many.

The good news is that because of this court ruling, Michigan might be one step closer to fixing this problem, whether Benson wants to or not.